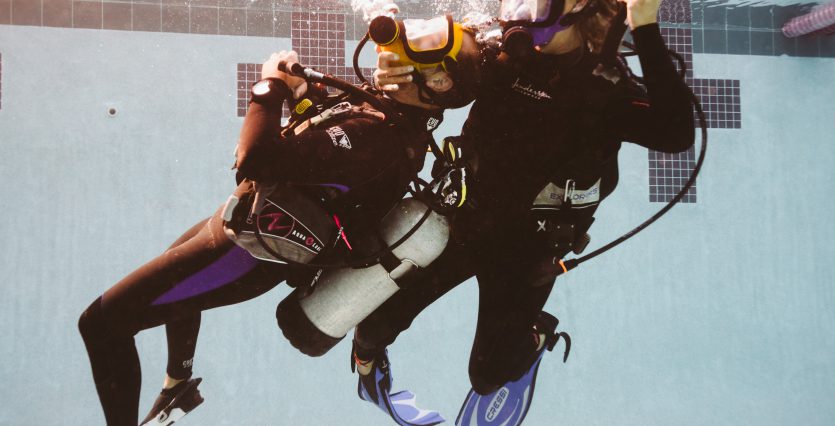 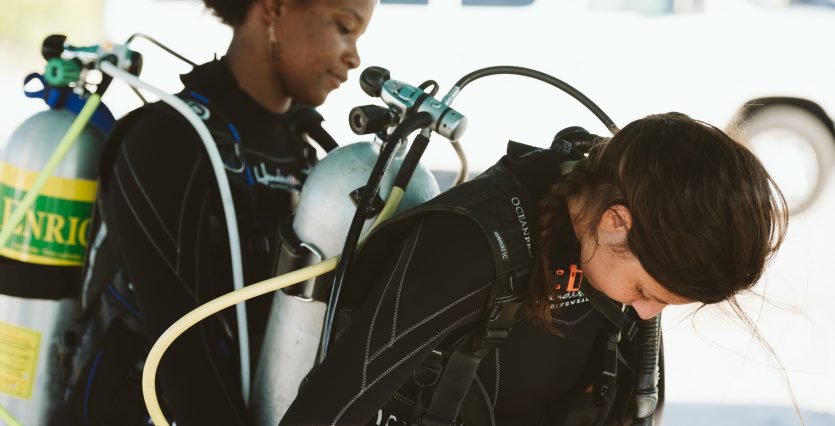 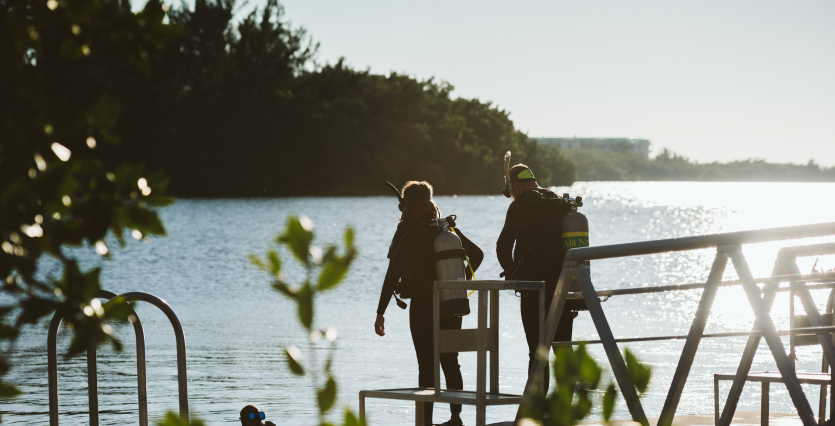 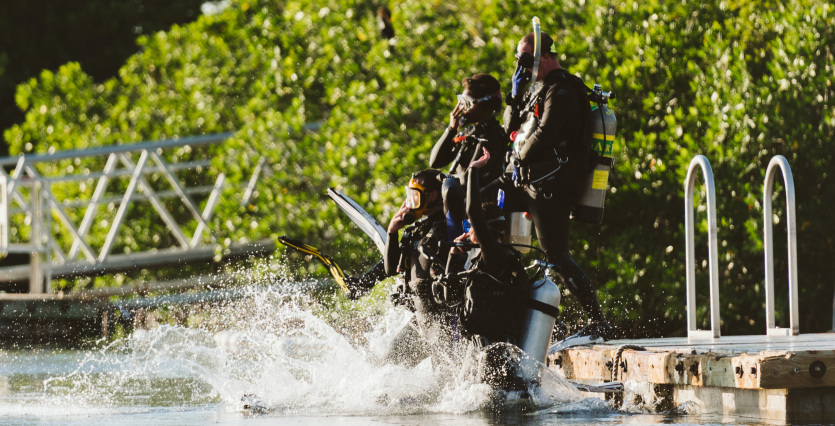 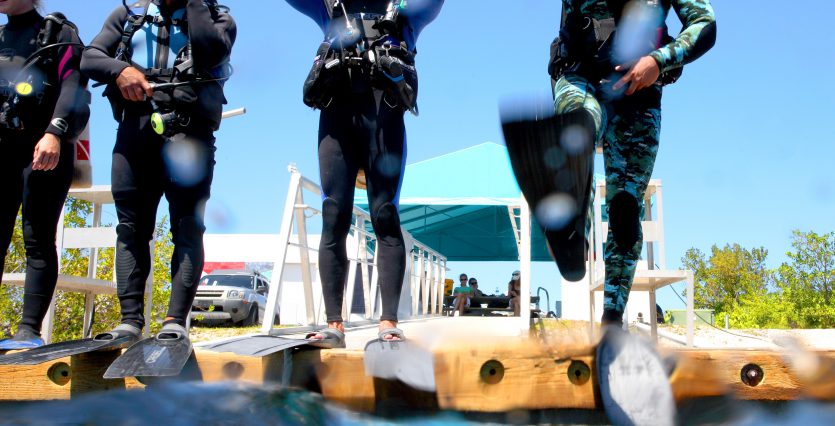 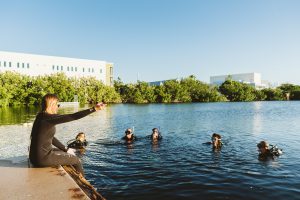 Florida Keys Community College (FKCC) is the smallest of Florida’s Community Colleges, yet it offers an awesome array of dive/marine-related courses. Located on Key West in the heart of a National Marine Sanctuary, it is just 5 miles from the only barrier coral reef in the continental United States.

FKCC has an Olympic-size pool and an adjacent underwater training area, which has a 4.5- and 9-meter (15- and 30-foot) training platform, a sunken vehicle and other large, fun-to-examine underwater things. The facilities are used extensively for work-diving training and underwater police sciences technology, as well as recreational and scientific dive training.

In 1963, the Florida State Legislature authorized the establishment of the Monroe (County) Junior College. Classes began in August 1965 in a school building and offered a physical education course in “co-ed scuba diving,” which covered “physical principles of diving, a study of diving diseases, search and navigation, a study of marine animals, collection techniques, decompression techniques and repetitive diving.”

In October 1965, the name was changed to Florida Keys Junior College (FKJC) in anticipation of expanding its offerings throughout the county. The following year, a groundbreaking ceremony took place for a permanent 7.7-hectare (19-acre) campus; the remaining 39 hectares (97 acres) were the underwater water training area/lagoon or bay bottom. An introductory oceanography course and a course titled “pre-marine science” were added.

In 1969, a new Lower Keys hospital was built next to the FKJC campus, and FKJC began offering nursing and marine propulsion technology programs. By this time, the physical education program added skin diving and beginning and intermediate swimming. Within two years, NAUI- and YMCA-approved advanced scuba diving was also offered, as was search-and-rescue.

By 1973, underwater photography was offered as a separate course. The following year, marine biology and environmental science courses were added to the curriculum. Scuba instructor training followed.

Robert “Smitty” Smith joined the staff of FKCC as coordinator of business, industry and community services in 1984, also serving as chairman of the FKCC Committee on Coordination and Safety of Underwater Activities. Later, he became an adjunct instructor with the Institute of Criminal Justice (police academy), which was co-located on the FKCC campus. Smith had previously been director of the National YMCA Center for Underwater Activities.

FKCC began offering a two-year degree program in recreational dive management. One-third of the required courses were dive-related, one-third were business courses and the final third were general education.

Concurrent with the dive-program expansion was the acquisition of 45 timbers from the Atocha treasure ship, which sank 66 kilometers (41 miles) off Key West in 1600. These 135- to 725-kilogram (300- to 1600-pound) timbers were laid out in the lagoon and became the basis for a new marine archaeology course.

By 1988, FKCC had moved into the underwater law enforcement area with courses in underwater search-and-recovery, public safety diving, and underwater police science and technology.

Recreational diving had expanded to include diver stress, rescue and emergency medicine, divemaster, and scuba maintenance and repair. A new course in research diving combined biology, geology and archeology, training that met the standards of the American Academy of Underwater Sciences. By 1992, FKCC offered a two-year marine biology technology degree.

An array of state and federal agencies, such as National Oceanic and Atmospheric Administration, increasingly began to use FKKC diving facilities. The U.S. Army Special Forces Underwater Operations School donated two hyperbaric chambers to FKCC, which became the basis for hyperbaric training. In 2001, diving medical technology, dive medical technician and nitrox for working divers courses were added to the course selections.

Smith phased out of the FKCC diving programs in 2007, focusing on his U.S. Army Corp of Engineers diving safety courses. He was followed by his longtime assistant, Bob Jason. Jason was later replaced by Bill Chalfant.

The old Dive Advisory Council was revitalized as the Diving Business and Technology Program Advisory Committee, made up of respected professionals in the diving industry. The main role of the advisory committee is to package programs and courses to meet the needs and requirements of an ever-changing diving/marine environment by working with the officers of the James E. Lockwood Jr. School of Diving and Underwater Technology in planning, organizing and restructuring courses.

Today, FKCC is a vital asset for the Florida Keys and a unique asset for the diving and marine industry. What made FKCC the “Little Giant of Diving” was partially the location. Mostly, however, its growth has been the result of the perseverance of uniquely qualified, highly motivated and visionary underwater specialists who marshalled like-minded professionals in local, state and federal government into mutually beneficial cooperation.