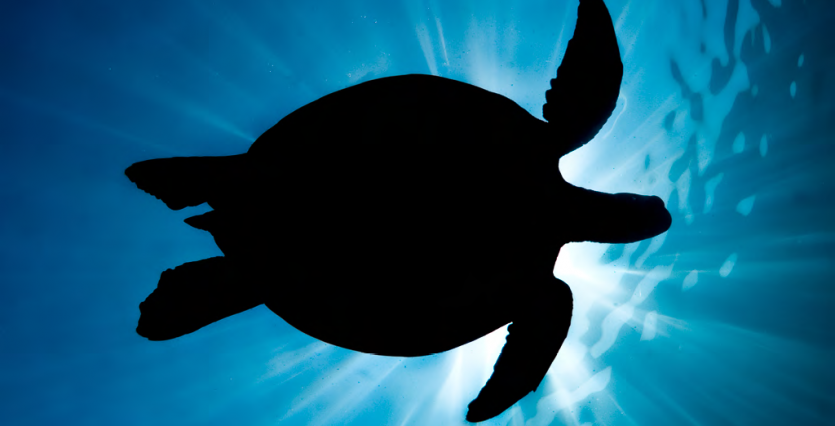 Eye-popping colors. Entertaining antics. Bizarre-looking creatures. Photogenic poses. Fascinating behaviors. Megafauna. Seascapes. No doubt about it, as underwater photographers we are blessed with an abundance of fantastic subject material and photographic opportunities. 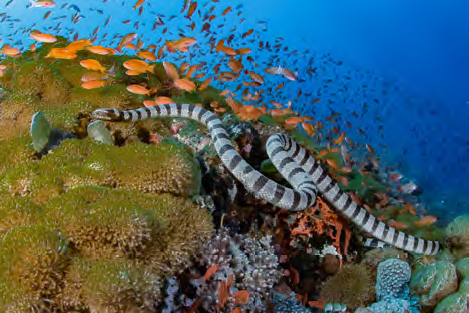 Upon first consideration, creating compelling images might seem to require little more than acquiring sharp focus and properly exposing a subject. In fact, that is a trap many beginning underwater photographers fall into. A problem they experience is that, in many instances, the subject the shooters

found to be so captivating underwater virtually disappears in their photograph. That’s because the subject blended in with its surroundings instead of standing out to the viewer. When that happens, the result is all fizzle and no sizzle.

The question is “what can you do to make your subjects stand out in ways that command viewer attention, instead of having your subjects get lost’ in their surroundings?” In some instances, the answer is not much. For example, creatures that are masters of camouflage are likely to blend in with their

surroundings. Recognizing those scenarios is a useful skill. It certainly is not wrong to capture images of these creatures, but no one wants every image in their library to be like this shot of a black and white crinoid squat lobster on a similarly patterned and colored crinoid.

On the other hand, there are plenty of other instances where subjects can be made to stand out. As examples, if you (1) use a strobe light to bring out and draw attention to the colors in subjects that are in the foregrounds of photographs to help separate them from their backgrounds, and (2) compose your images in a manner that helps create significant contrast between subjects and backgrounds, your subjects have a good chance of commanding viewer attention. 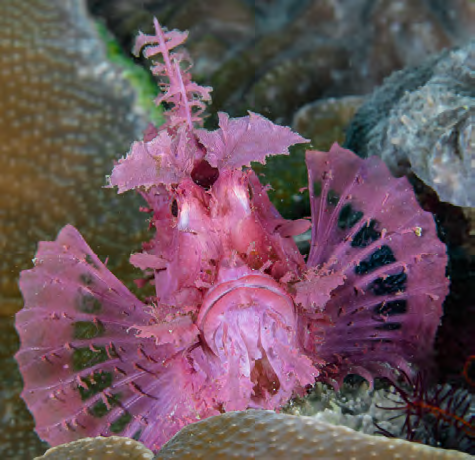 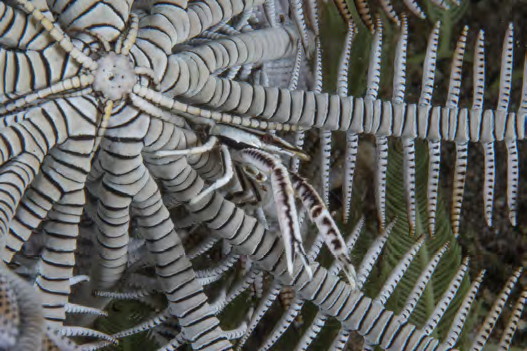 In underwater photography, contrast is usually created by the difference in (1) color between a subject and its surrounding, (2) the difference in brightness between a subject and its surroundings, or (3) both. To take advantage of contrast, you want to pay close attention to the elements in your frame that are in front of, next to, and behind your subject. In other words, you want to consider how elements in your composed frame that are not the subject (whether close to the subject or in the distant background) will appear in your photograph, and what impact their appearance will have on the way your subject will look in a given photograph.

While it might sound obvious to suggest that you consider the background, many underwater shooters are so taken by their subjects that they fail to see, much less consider, the background. But camera owners that grow into photographers as their skills increase will look at and consider how the elements in the frame that are not the subject might appear almost as soon as they see a subject they want to photograph.

When photographing reef creatures, creating contrast between a subject and background often involves looking for contrasting colors that cause a subject to stand out against its background. As an example, you might try to compose a shot with a reddish or orangish squirrelfish, soldierfish, or creole fish contrasted against a yellow or green sponge instead of one that is a similar color to the fish as seen here. 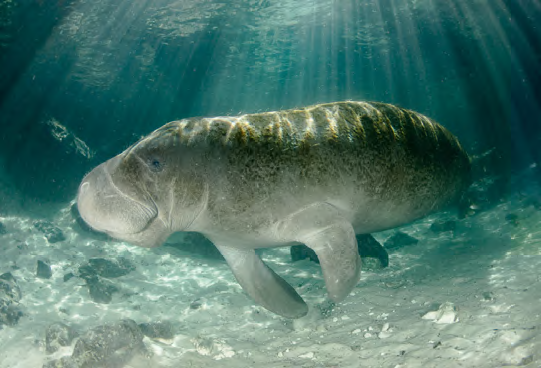 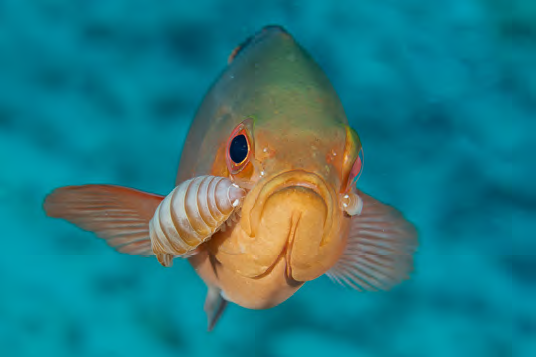 Daytime shot of a creolefish with soldierfish isopod on both cheeks

When photographing larger marine animals such as dolphins, turtles, and these whitetip reef sharks, it is often beneficial to compose your shots with the subject(s) surrounded by properly exposed blue or green water instead of against a background of the reef.

It can be more than just a little disappointing to discover that reef, the sea floor, or some other element in a frame that was seemingly in the distant background caused your subject to lose impact. 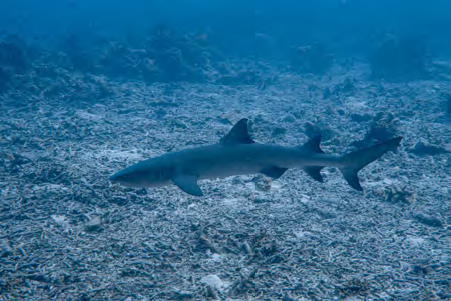 In many instances getting below a subject and shooting at a slightly upward angle can help you create the desired contrast between a subject and its background of properly exposed water. 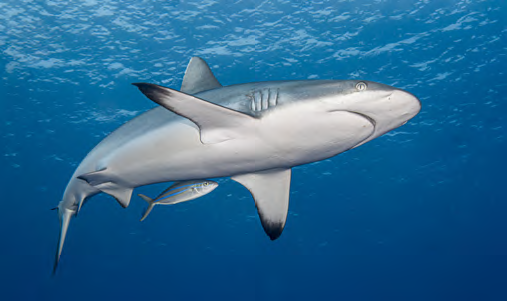 Conversely, under-exposing the background, thus causing what could have appeared as bright, blue water in your photograph to be dark blue or even near black, made this manta ray difficult to see. In short, the poor exposure of the background can turn a wonderful opportunity into a disappointment. 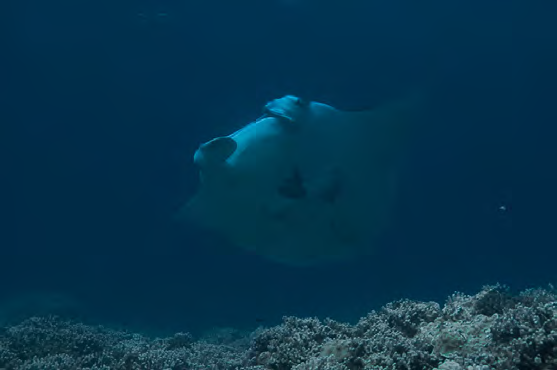 I want to be clear about the fact that I am not in any way suggesting that you avoid having a reef, even a distant reef, in your composed frame. A reef or other element can add context, allowing viewers to quickly realize that your subject was seen in a reef ecosystem or at a seamount, not in open water. But if you do include a section of reef, kelp, perhaps a part of a shipwreck, etc., you want to compose your frame to avoid having the subject blend into that element. 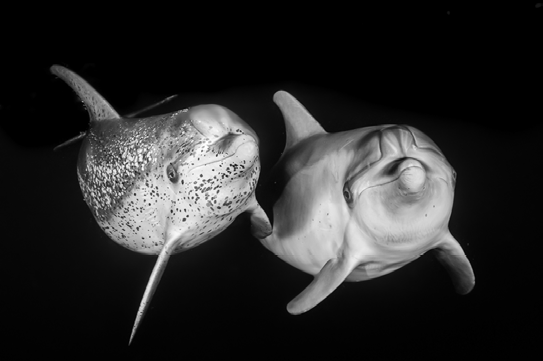 I do not want to imply that a dark, or even black, background or a light, or near bright white background will always be ruinous. The contrast in tone between a bright, whitish subject such as these Atlantic spotted dolphins and the black water as seen at night helps make this image compelling.

Conversely, this dark silhouette of a green sea turtle contrasted against bright blue water helps make this shot a winner. 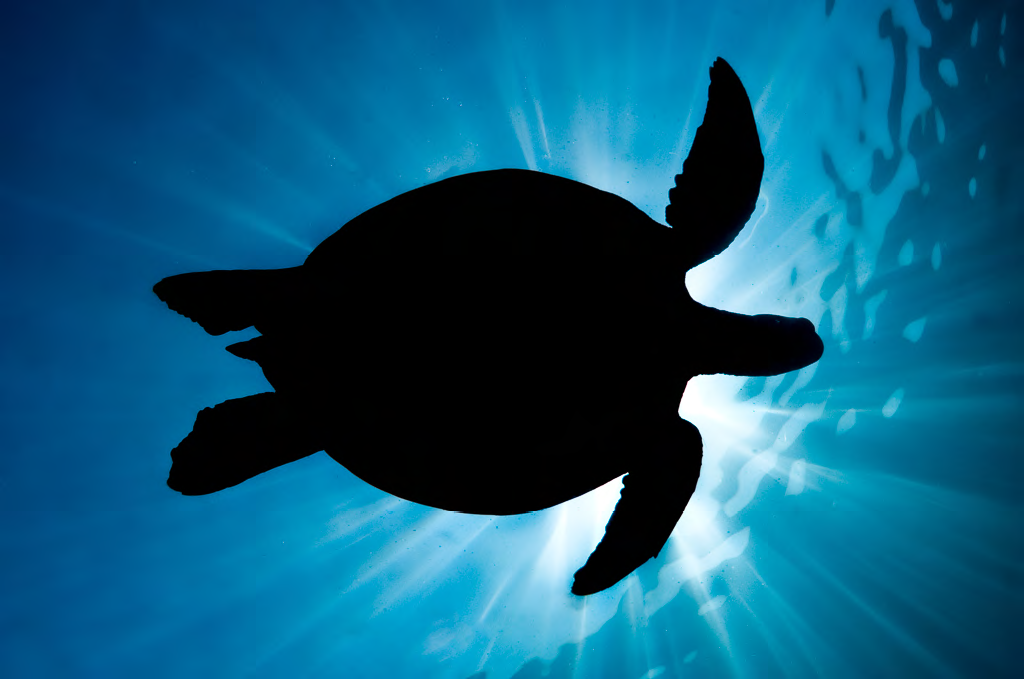 Creating contrast is not a case of one method that works in all scenarios. But contrast, however it is achieved, can go a long way towards helping you create compelling photographs. I hope you will take this message to heart.

And, whatever you do, always remember to enjoy the process, not just your processed images.

Previous Post
The Adventure of the SY Blowing Bubbles : Encounters With Big Ocean Creatures
Next Post
NAUI France is Growing!