The Adventure of the SY Blowing Bubbles : Encounters With Big Ocean Creatures

As we are heading from Tenerife to the next island called “La Gomera”, we are crossing some serious deep waters, up to -3000mtr (or -9000ft) of depth. These depths are reached quite close to the shores of all the Canary Islands as all the islands have a volcanic background (see article SY Blowing Bubbles Goes Hotter Than Hot). The islands originated from volcanic disruptions on the seabed, the seabed opening up and blasting out lava which created the islands (and even now is still creating islands as the island of La Palma is ‘growing’ as we speak with about 1,5km² per day). On the island of Tenerife, the Vulcano El Teide has a height of 3.715mtr (12,188ft ) and is considered one of the highest peaks on the earth surface as it is settled on the seabed at -4000mtr (12,000ft) deep giving it a total height close to equal Mount Everest. All of this by blowing out lava from the center of the earth and so creating a giant pile that ended up in a complete island. Nature’s way of creating things.

On our journey towards La Gomera, we pay special attention to our on board sonars and depth sounders as the steep deep sea walls attract some of the biggest ocean creatures that live on our planet. During the crossing of the deep sea ledge, we notice a lot of activity below the Blowing Bubbles and we can identify a serious amount of fish being present around us.

Lowering the sails and continuing slowly on the engine, gives us more time and possibilities to react towards the ongoing fish movement! Just barely ready to continue on the engine, Karen spots a V-shaped air blast with water bubbles on the horizon. Not really being sure what it is, she continues to focus on the site, and soon, she spots a second and third spout of air and water drops in the air. We have encountered a pod of…pilot whales. 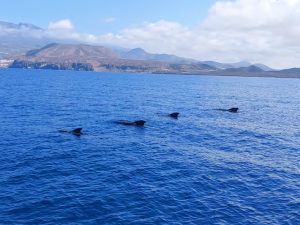 Pilot whales are cetaceans belonging to the genus Globicephala and from the family of the Delphinidae (and do not be mistaken, they are NOT dolphins!).

Pilot whales feed on squid and hunt in very deep waters, over 1000ft deep or even more!

They travel and hunt in groups of 25 to 50 animals.

The name ‘Pilot’ whales come from the fact that each group has a large male that pilots the group and so the other group members follow in its trail.

As we stopped the boat to observe better the large group in front of us, we can identify about 9 whales directly in front of us, and indeed, just a little further, we can see a large dorsal fin sticking out of the water, the piloting male is there! 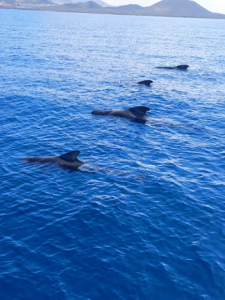 The group of pilots whales seems very relaxed and it looks like they are just floating on the surface. With SY Blowing Bubbles also just floating around and having the wind favorable, we float closer and closer to the group of pilot whales until we are barely just one meter (three feet) away from them. Still, they just hang there and everybody on board SY Blowing Bubbles is now in a trance of silence and enjoyment. Nobody dares to speak, afraid to scare the pilot whales. Minutes pass by, just the breathing of the pilot whales is breaking the silence!

We prepared our journey quite well and these moments are the moments we were waiting for!

Onboard SY Blowing Bubbles, we carry an ROV or Remote Operating Vehicle (underwater drone) and this seems the perfect moment, event to deploy our drone and get some nice underwater videos.

As we are not sure if the pilot whales will be disturbed or annoyed by the drone, we perform a small series of test runs before approaching them and…

Guess what…see the attached link and enjoy the video of a group of pilot whales. A unique encounter in the Atlantic Ocean.

We mark the GPS location of this encounter in our ships logbook:

As we do not know yet if we might return to this route, it is always a smart idea to mark special events, moments, and encounters in the ship’s journal.

Later, this has proven its value, as we passed these coordinates on to three other ships that were very interested in meeting up with the pilot whales and as it seems, the pilot whales hang around the same area for a long time because of three ships reported the same encounter as we had. And sharing is caring, so that made us very happy!

On our way to La Gomera, we encountered in total four pods of pilot whales and have spent hours and hours with them. 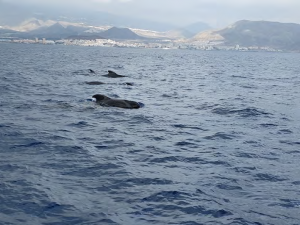 After arriving in La Gomera, we decided to return the next day (and the day after) to the same coordinates and spent some more time with these magnificent ocean creatures!

It never gets boring and believe me, floating side by side with the impressive deepsea squid hunters, just gives you all the chills you need to become very chillax and emotional as it is clearly up to the pilot whale to decide if you are worthy enough to let you approach him (and not the other way around).

Here, in the middle of the ocean, we, humans are the lesser ones in the equation.

Previous Post
Your invitation to join a NAUI Committee!
Next Post
A Little Contrast Goes A Long Way