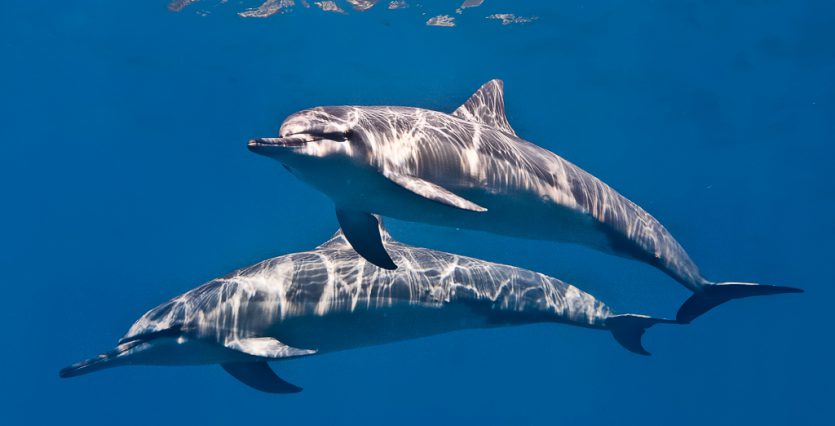 One of the skills that clearly separates accomplished underwater photographers from the rest of the photographic pack is that highly skilled shooters recognize when their shooting plan is not going to allow them to produce the photograph they have in mind, and therefore, they change their plan on the fly.

When underwater photographers first try their hand, there is a tendency for them to swim around and take pictures of whatever they encounter. Over time, the haphazardness of that approach leaves a lot of photographers feeling unfulfilled.

Instead of entering the water and trying to photograph any subject they randomly encounter, many experienced photographers find it far more challenging, rewarding, and fun to visualize the photographs they want to create, and then do their best to make those images. Given their lofty goal, it is easy to understand that any number of factors ranging from the inability to find the desired subject or finding one that is impossible to work with due to poor visibility and too much current and surge can make creating the desired image unattainable.

As unlikely as it might first seem, a lot of photographers, especially those with less experience, proceed by taking pictures without trying to adjust to the factors that must be dealt with if they are going to acquire their desired image or any usable image. They shoot, review the result on their camera’s LCD screen, cringe at the result, and take another shot without making any adjustments. The strategy of doing the exact same thing while hoping for a different result rarely, if ever, produces the desired image.

In too many instances, because we want an image so badly we just trip the shutter again and again without changing a thing while hoping that one of our images will magically defy the laws of physics and nature, and somehow turn into an award-winning shot.

The bottom line is that hope alone is not a shooting technique that is leads to success. In my classes, I call relying on hope the “my mother loves me so much” strategy, meaning I think my mom loves me so much that I’ll get my shot no matter what logic and physics dictate. I can assure you that despite my many flaws my mother loves me as much as any mom has ever loved a son, but relying on her love alone to get my shot doesn’t work. In my early days as an underwater photographer I tried that strategy, and I have exactly zero photographs to show for it.

My objective in writing this piece is to help you recognize that a fundamental part of being a good photographer is making a change when you need to. It is something better shooters do.

When trying to make a particular photograph, the first thing you need to do is envision the image, and then you need to consider what you need to do to get the shot. Consider the two images of the California sea lions that help illustrate my thoughts. My original idea was to create a compelling silhouette. To get that shot I needed the following: (1) to see strong contrast between a sea lion and its background, (2) reasonably clear water, (3) a high enough light level so that I could use a shutter speed that was fast enough to “freeze” the action and produce crisp lines of delineation between a sea lion and the water that bordered it, (4) a strong upward shooting angle, and (5) an interesting pose from the sea lion. 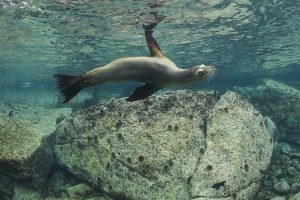 If these factors didn’t occur simultaneously, I wouldn’t get the shot I was hoping for, no matter how much mom loves me.

As can be seen by the first picture I found a sea lion in the shallows, but I didn’t have the needed conditions for producing the desired silhouette. 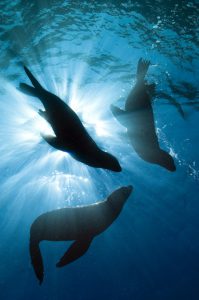 Something had to change. I needed to find another shooting angle, another sea lion, or decide that I wanted to create another type of image. All of these changes could help me produce a pleasing image, which I think I did, as opposed to simply blasting away without changing anything, a path that would lead to disappointment.

As you can see from the silhouette, I chose to move offshore, find another group of sea lions, and create a silhouette, although it was different than the original silhouette of a single animal that I had in mind.

The two photographs of a school of scad illustrate another time when I changed my photographic plan underwater to try to maximize an opportunity. I had been told about the school and could actually see the dark patch in the water they created as they moved down the coast in Bonaire. I thought this was going to a great chance to create an impactful image of a large school of fish swimming in inviting blue sunlit water. I thought the image could convey a sense of “why we dive” that shared the beauty and excitement of diving. 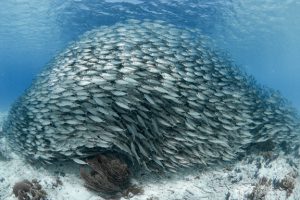 But the shot of the school alone left me feeling a little disappointed. I didn’t think it made the statement I hoped to make, and to my thinking it failed to share my intended message. To capture the shot of the school I got low swimming just a few feet off the sea floor and shot at a slightly upward angle, an approach that often adds visual appeal. But not this time.

I realized that if my sense of “why we dive” was the message I wanted to convey, putting a diver in my photograph might help me succeed. But when I tried to include the diver, the diver blended in with the school too much or forced me to compose such a wide frame that the school lost its appeal as I had to shoot through too much water to create a crisp image. The diver added perspective, but the composed frame still lacked appeal. 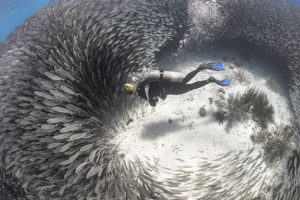 As a result, I decided to go “against the book.” I ascended to within a few feet of the surface and shot at a downward angle. So much for the mantra “get low, get close, and shoot up”. That allowed me to see the diver in the middle of the school, and I thought that frame was a great way to share the sense of “why we dive.” As underwater photographers we often hear that shooting at a downward angle doesn’t work. I think that advice has a lot of truth in it, but it is only a guideline, not an absolute rule.

The last two examples are from times when I went back to the surface and changed my lens from a 60mm lens to a 100mm lens in order to make a compelling photograph. In the first example I was diving out of the Atlantis resort in Puerto Galera in the Philippines where I serve as one of our two Photography Ambassadors when I spotted a ring-tail cardinalfish holding a mouthful of eggs. The ring-tail is one of those species in which the male is sometimes referred to as Mr. Mom as it is the male that holds and protects the fertilized eggs of its mate until the eggs hatch. 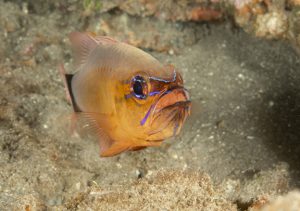 I had a 60mm lens on my camera, and try as I might, I could not get close enough to the fish to compose an image that was as compelling as the one I could “see” in my mind’s eye. 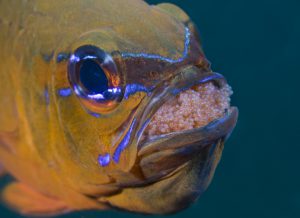 To create my desired image, I had to go back to the resort and change my lens. That’s what I did as I replaced my 60mm lens with a 100mm lens. The 100mm lens allowed to me fill a significantly larger percentage of a photographic frame with my subject, and that enabled me to create a far more interesting photograph.

The second example involved the exact same lens change. In this case, I wanted to make a photograph of a juvenile garibaldi. I thought my 50mm lens was the right choice and that I would be able to get close enough to my desired subject to create the desired image. But every time I got as close as I needed to in order to fill a pleasing percentage of my frame, the fish turned away from me. 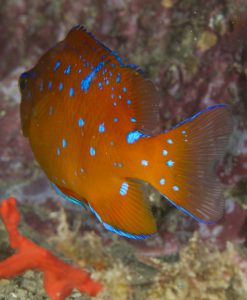 Once again, it was back to the surface to exchange the 60mm lens for a 100mm lens. The lens change made a huge difference as I was able to compose a pleasing frame with my subject facing my lens instead of swimming away from me. 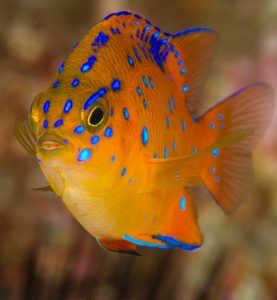 The larger point is that as underwater photographers we run into similar scenarios quite often. It happens when we can’t get a face-first angle when photographing macro subjects, when subjects are so well hidden that we can’t compose an interesting frame, when we are unable to get as close to our subject as we need to in order to create a compelling image, etc.

Rather than attempting to explain to viewers what our problems were and why they should applaud our mediocre results, I say change something and make an image they can truly appreciate. This approach will help you produce more images that please you and your audiences.