If you were to ask a group of underwater photographers to list some of their favorite subjects, they would likely include whales, sharks, manta rays, dolphins, sea lions, manatees, shipwrecks, and myriad reef creatures. If those same photographers were then asked to draw the photographs they would like to take, my bet would be that very few, perhaps none, would draw images that reveal patterns or that use a reflection or shadow to add dimensionality to their imagined photograph. While patterns, shadows, and reflections often get overlooked, if used wisely they can be very powerful tools that turn good moments into extraordinary opportunities that, in turn, can be used to draw viewers into your photographs.

A look around in a coral reef community, kelp forest, and any place you see a school of fish will quickly reveal that there are patterns all around you when you dive.

You will quickly discover the same to be true if you take a closer look at the skin of many fishes and the gas bladders that buoy kelp stipes etc.

Despite the fact that we are surrounded by patterns, there is a tendency on the part of many underwater photographers to overlook them when considering photographic subjects. That can cause you to miss some wonderful images.

There is no question that patterns abound in the natural world and they can provide compelling subject matter. In the world below the waves, patterns appear in many forms as they can be created by unlimited combinations of colors, geometric shapes, and structures.

In some instances, a pattern is repeated over and over again in a precise manner, but more often than not, in nature the repetition is not precisely uniform. This type of loosely defined pattern is often strong enough to command our attention and be very pleasing to the eye.

When photographing a pattern, it can work to your advantage to fill your frame with the pattern. Doing so can add impact and help you frame out distractions.

But filling the frame with a pattern is not an absolute rule that if broken will result in a disappointing image. If thoughtfully composed, a photograph that includes a pattern that only occupies part of the frame can also create a strong image. In this scenario, you want to be sure that the part of the frame that is not the pattern does not contain any features that draw attention away from the pattern.

While I hope to encourage you to make looking for patterns as your primary purpose on some dives, you can also “save” some dives by looking for patterns when you are unable to find other good subject matter. All you need is a reef, sea star, sea cucumber, crinoid, coral head or coral polyps, kelp stipe, etc. to allow you to put your imagination and creativity to good use.

It is also worth noting that patterns like the one created by the branches of a sea fan can provide interesting backgrounds for other subjects like the threadfin anthias featured in this image. 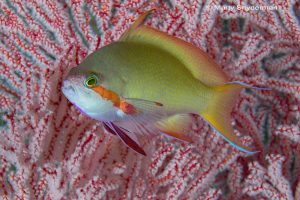 Reflections can add dimensionality and if used well can draw viewers into your photographs.

On sunny days when the surface is flat calm, you might be able to benefit from an opportunity to include a reflection from a subject that is swimming just below the surface as was the case when I created this photograph of an American manatee surfacing to breathe.

As a rule, for the reflection to be visible, your subject will need to be at or just slightly below the surface.

photograph of a yellow-lipped sea krait. 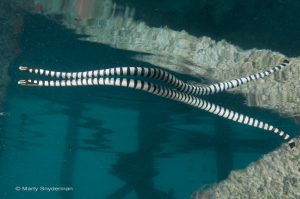 If you see the reflection, it often works best to compose your frame with your subject being positioned slightly lower than it would be if no reflection were present. Composing in this manner can help you include your subject and the entire reflection in the frame instead of cutting off part of the reflection and losing some impact.

While you can’t make your subject swim into shallow water, as a savvy photographer, you can look for shadows when working in the shallows. To include a shadow cast by your subject, the subject will need to be fairly close to the sea floor as was the case with this tiger shark that was photographed in Bahamian waters. 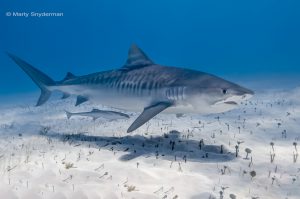 As a rule, including a strong shadow requires that the sea floor be comprised of whitish sand or lightly hued rubble. The shallower the water, the brighter the sunlight that illuminates the sea floor will be and the more distinctive the shadow is likely to be.

When composing a frame that includes a shadow, you will probably want to position your subject slightly higher than you otherwise might, so you can easily include the entire shadow in your photograph. Depending on the orientation of your subject to the sun and the direction you are shooting from, you might also want to position your subject a little closer to you or farther away from you so that you can include the entire shadow in the frame.

If you compose your frame with your subject too close to the center of the frame it is all too easy to cut-out some of the shadow, this losing some of the potential visual appeal that might be gained by including the entire shadow.

Making it a habit to look for and use patterns, reflections, and shadows in photographs usually requires some experience and perhaps the influence of the work of another photographer. That is what happened to me. Years ago, I was a shipmate with a friend named Sara Shoemaker (now Sara Shoemaker-Lind). Sara is a Rolex Scholar and a graduate of the Brooks Institute of Photography. No surprise, Ernie Brooks, a highly regarded underwater shooter who passed away recently, was a strong influence on Sara and her photography. During several of our dives while I was trying to photograph a variety of reef creatures and seascapes I noticed Sara working diligently to photograph other subjects, I saw her composing frames and her strobes firing, but frankly, I had no idea what she saw that I was missing.

One evening Sara shared some of her images with me, and that is when the lightbulb in my head turned on. Sara had acquired a gorgeous collection of photographs of patterns. There were the suckers on the arms of an octopus, crinoids, the gill plumes of worms, sea stars, coral polyps, mollusk shells, and the bubbles in the foam of waves that were breaking on the beach. I was blown away. It was as if she was diving in another ocean. Certainly, she was seeing the ocean in a way that I wasn’t.

Sara’s work opened my eyes to a new way of experiencing the oceans and new photographic possibilities. As a result, in the years since I have made a concerted effort look for and photograph patterns in the undersea world.

I don’t know if your underwater photography includes the use of patterns, reflections, and shadows, but if it doesn’t, I encourage you to consider ways to incorporate them into your body of work. If you are anything like me, it will help you see the beauty the underwater world has to offer in a new way.