When accomplished underwater photographers share their techniques, one of the first pieces of advice that is offered is often “get rid of the water”. Of course, when you are diving there is no way to eliminate the water. So, how can you follow the well-intended advice? The answer is that the intent of the advice is to encourage you to shoot through as little water as possible by getting as close to your subjects as you safely and reasonably can.

Upon hearing this advice, it is only natural to ask why more experienced underwater shooters insist that getting close to subjects is so important. Here are three strong reasons that give their advice credibility:

You can see how striking the differences are in terms of detail, sharpness, and color by comparing these two photographs of the Caribbean reef sharks seen here.

A Caribbean reef shark photographed from farther away or through more water. 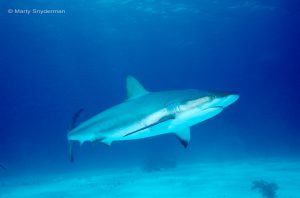 Another Caribbean reef shark photographed from considerably closer (through much less water) than the shark in the previous example. 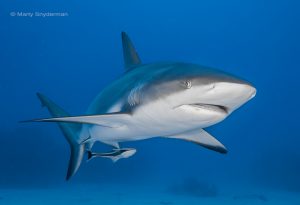 As any diver knows, distances and sizes can be difficult to accurately judge underwater, and as a result, less experienced underwater photographers often think they are much closer to their subjects than they actually are. In our basic certification classes, we learn that refraction causes objects to appear to be larger and closer underwater when viewed through a scuba mask that has a relatively flat face plate. Over time, most divers learn to compensate for refraction and become considerably better at estimating distances and the sizes of various marine animals and other objects they see during their dives.

But whatever the reasons, the results of being too far away from subjects are usually flat colors, a lack of contrast which translates to “fuzzy-looking” subjects, and less visible detail in the subject than the shooter had hoped for as was the case with this sea lion 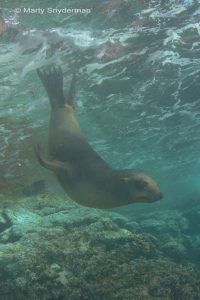 In my underwater photography classes, I often share my experience by explaining that when I ask underwater photographers how close they were to their subject, the shooter often grossly underestimates their camera-to-subject distances. I have often had a questioned photographer tell me that they were only two or three feet away from a subject that I saw them working with and was absolutely sure they never got to within ten feet of their subject. This difference in estimated camera-to-subject distance often comes into play when the subject is a shark, sea lion, dolphin, manta ray, or other large, sometimes fast moving, and perhaps, potentially dangerous, subject. 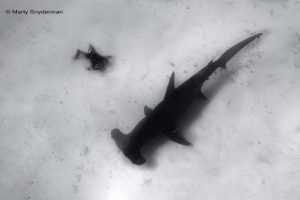 To their dismay, when these photographers see their images, they are often quick to realize that they were farther away from their subject that they estimated.

Their new realization is further confirmed in many scenarios when they compare their photographs to those of more experienced shooters that were on the same dive working with the same subjects. 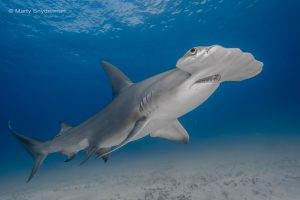 This explanation is not intended as a criticism of any photographer. Instead, it is my desire to help you shorten your own learning curve, minimize disappointments, and help you get the best possible results out of the photographic opportunities you experience.

Another shooting scenario in which the issue of getting close to subjects often comes into play is when photographers use a zoom lens. When using a zoom lens, the mantra is “zoom with your fins, not your lens”. First, get into your desired shooting position while getting as close to your subject as you can, and then use the lens to compose a compelling frame. That is what I was able to do when creating this photograph of the face of a curious California sea lion.

By contrast, this photograph of a California sea lion was shot from too far away, thus through too much water. The lens was “zoomed in” to its telephoto limit (narrowest angle of view). This is a scenario you want to avoid. As you can see the resulting photograph lacks sharpness, has muted colors, and lacks detail. Ultimately, this shot is headed for the cyber trashcan.

The takeaway message I would like you to benefit from is when you think you are close to your subject, if it is safe and possible to do so, get closer. And when you have done that, get even closer if you can. Close matters in underwater photography, and you will see the difference in your photographs. 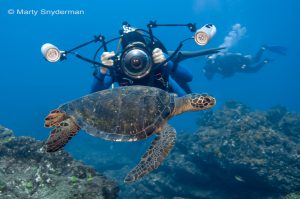 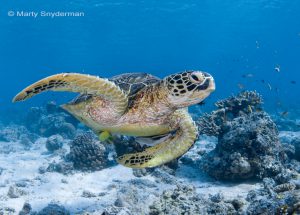 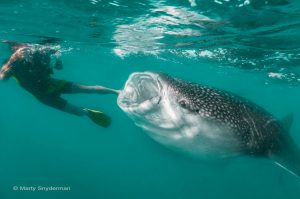 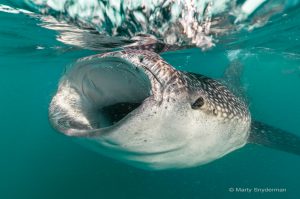 See you next time. In the meantime, be sure to enjoy the entire photographic process, not just your processed images.

Previous Post
Think Patterns, Reflections, and Shadows When Making Photographs
Next Post
The Normalization of Deviance (aka “Short Cut Mentality”)