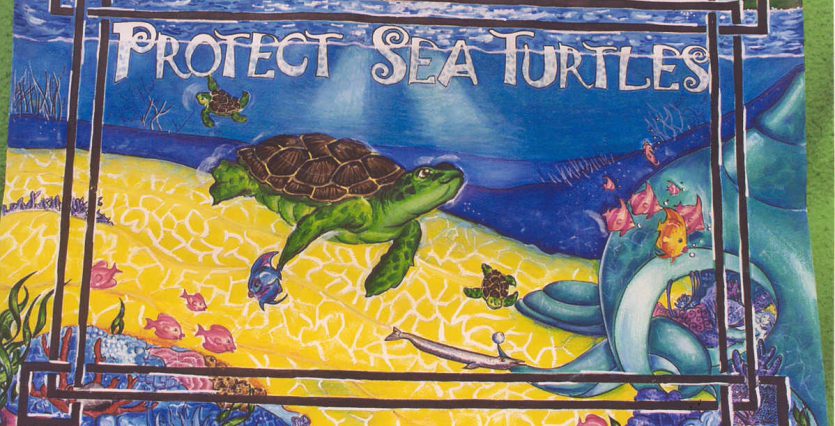 ‘Human Exploration of the Oceans’ 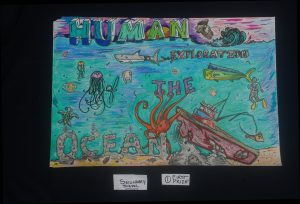 ln the more than 30 years since the International Poster Contest For Youth and its allied environmental-educational organizations have been involved in seeking solutions to the problems of pollution and depletion of the world’s marine resources. Young people from all over the Planet Ocean have submitted entries. The world’s natural resources are finite not infinite. World population is over 7 billion people – a far cry from the estimated 138 million who inhabited the Earth 2000 years ago. The History of Diving Museum in Islamorada, Florida, joins sponsors of the International Poster Contest for Youth this year to celebrate our 20l7-2018 theme: Human Exploration of the Oceans.

Freediving for pearls, sponges or coral, to salvage shipwrecks, to catch seafood and in military activities has been pursued from earliest times. Ama divers have practiced their diving skills as far back as two thousand years ago in Japan. Breath-hold diving enabled the first underwater exploration and exploitation of ocean resources. Diving bells were invented that enabled freedivers to remain underwater longer.

Aristotle, the Greek philosopher who lived from 384 to 322 B.C. himself a student of Plato and mentor of Alexander the Great, described a diving bell in the fourth century BC. A diving bell is simply an inverted, airtight space that is sunk below so breath-hold divers can swim into it and replenish their air without having to surface for a breath.

In 1710, John Lethbridge built an air filled barrel that enabled him in successfully salvage treasure from shipwrecks. The first diving helmets were developed in the early nineteenth century. Helmet divers’ hard hats were made of copper and brass, fitted to waterproof suits. Hardhat divers, as they are called, wore heavy weights and brass shoes. They walked on the bottom of the ocean to do their work. Air was supplied from the surface first by hand pumps, then mechanically operated pumps and eventually from motorized compressors. 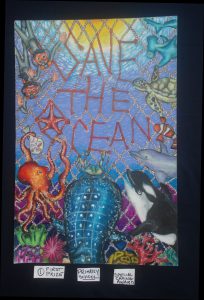 The first demand regulators were created by two French inventors August Denayrouze and Benoit Rouquayrol. Their devices were put into general use for underwater work in 1864. It wasn’t until 1925 that French naval commander Yves Le Prieur invented the ï¬rst open-circuit diving equipment. An original Le Prieur diving apparatus is on display at the History of Diving Museum. It consists of a small tank that contains compressed air attached to a mask worn by the diver.

Diving without cables describes the freedom of exploration with Le Prieur’s invention and subsequently with demand regulators developed by another French naval officer who had been assigned to Tailliez’ command, Jacques-Yves Cousteau. The regulator was designed by French engineer Emile Gagnan. Tailliez called his group of early diving pioneers ‘Les Trois Mousquemers.’ It is a take-off from Alexandre Dumas’ novel ‘The Three Musketeers,’ a legendary story of valiant guardsmen who remained loyal to each other with the motto ‘One for all and all for one.’ The Three Mousquemers included Frederic Dumas, Tailliez and his junior officer Cousteau.

Many new and wonderful inventions have made diving to great ocean depths possible. Commercial and military divers still use modem hardhat rigs. Remotely operated vehicles (ROVs) can descend to great depths for salvage and research, capturing images of the undersea. Recreational divers enjoy scuba diving and ocean exploration. SCUBA is an acronym for Self Contained Underwater Breathing Apparatus. Recreational divers volunteer to do marine surveys and cleanups. Marine scientists study ocean creatures in their natural habitat. Underwater photographers share the wonders they see with people who may never venture beneath the waves yet enjoy reading about marine creatures and seeing films of underwater discovery.

Human exploration has brought the ocean realm and its creatures into close scrutiny. Most of the world depends on ocean and marine resources for food. Land resources alone cannot support increasing world population. It is important to protect the ocean environment as the ‘farm’ of today and tomorrow. Ocean resources cannot survive in a polluted environment. As with land resources, ocean animals that are harvested for food must be given a chance to reproduce to maintain sustainable numbers. Overï¬shing and depletion of ï¬sh stocks and other resources has already taken a toll.

Contestants should express their concerns for protecting ocean resources, using imagination to depict human exploration of the underwater realm. Modern and historical depictions of human undersea exploration, work and protection of the ocean environment are welcome in the theme ‘Human Exploration of the Oceans.

To encourage young people everywhere to become aware of and share their concerns for the marine environment through poster art. Their messages will be brought to the widest possible audience to create a stronger commitment to protect the very environment on which all life on this planet depends.

All posters submitted to the International Poster Contest for Youth become the property of the contest organization and its sponsors. Entrants assign ownership and rights for reproduction, in all media, not to exclude any print, film, video or electronically transmitted medium as the organizers and their sponsors deem appropriate to further the goals of the contest.

Questions may be directed to John C. Fine at +1 914-725-0655 or johncï¬ne2@juno.com (text only, no photos or submissions). There is not and never been an entry fee or charge of any kind for participation in the contest. All entries become the property of the International Poster Contest for Youth and are not returned.

Open to all young people 19 years of age or younger with two contest groups: (1) Kindergarten through sixth grade, and (2) Seventh grade through twelfth grade.

A panel of judges, recognized for their work in the marine environment, public service and the arts will be assembled to view and select the winners. Judges’ decisions are final.

A number of these certiï¬cates will be awarded as deemed appropriate by the panel of judges.

The IPCFY created a special medal award to remember one of the 2005-2006 winners. Dar] Christin Harlan Desamero, 8 years old, student in the 3rd grade of Immaculate Heart of Mary College in Quezon City, Philippines, passed away without knowing that she had been awarded Honorable Mention for her beautiful depiction of a heart fanned by two sharks. Contest organizers continue to honor Darl’s memory with this Special Caring Award Medal in addition to the medals and awards provided winners.

The Darl Christin Harlan Desamero medal will be presented to the contestant whose work of art depicts that special love and caring concern so evident by Darl’s life and love of the ocean realm. No special entry is required. The winner of this medal will be chosen from among general contest entries.

Entry information must be included as illustrated and GLUED OR ATTACHED permanently to the BACK OF EACH poster submitted. Loose entry forms can be lost or result in mislabeling.

Contest address label information is on the reverse. This form may be photocopied and distributed as needed.

Please send or mail posters ï¬at or rolled in mailing triangles available free from Federal Express or US Post Office. Do not fold posters.