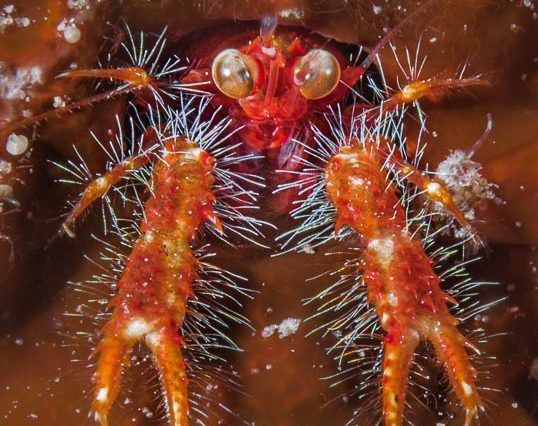 I think it fair to say that when most photographers first try their hand at photography, their feet are firmly planted on the ground and they are shooting through air, not water. And when first using any kind of wide-angle lens, beginners often back away from subjects and try to take in big scenes like an expanse of the Grand Canyon, a family portrait, sporting event etc. 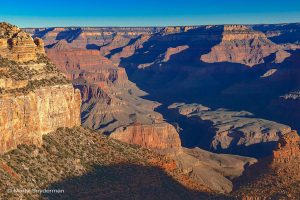 a view from the South Rim of the Grand Canyon

There is nothing wrong with backing away from a subject and trying to take in a large scene when shooting on land. In fact, that type of composition can be very effective. But underwater, that approach is a path to disappointment.

In underwater photography, there is a saying that goes “the first thing you want to do is get rid of the water”. The translation is to shoot through as little water as possible.  No doubt, there is much to be gained by getting close to subjects. With all other factors being the same, the closer you get to your subject, the less suspended particulate matter you shoot through, the sharper your subjects appear to be, and colors are more vivid.

Shot from too far away, this image sea fan and aggregation of anthias lacks crisp details and rich colors. 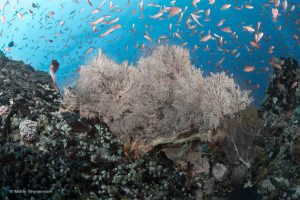 By comparison, you can see the increased sharpness and richer colors that resulted when these soft corals were photographed from close range. 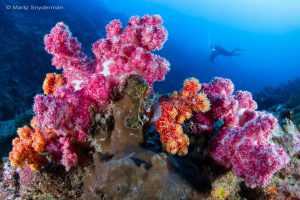 At some point in our pursuit of underwater photography, we become aware of the need to get close to our subjects, so they appear sharp and colors “pop”. But getting close can do more than that. Getting close to a subject can make the subject appear to “jump out” of its surroundings and command the attention of viewers. This is especially true when using a wide-angle lens and getting very close to a foreground subject. This technique is referred to as forcing the perspective and, if used well, can be an extremely effective way of emphasizing your subject and drawing viewers into a photograph.

The technique of forced perspective was also used to photograph this brain coral and diver. 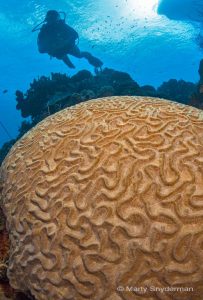 Consider the following: Underwater photographers typically use some type of macro lens to photograph reef creatures when first trying their hand at underwater photography. A variety of lenses that have relatively long focal lengths and short minimum focus distances are classified as macro lenses. With various combinations of camera and macro lenses, it is possible to capture life-size images of subjects that are as small as the sensor in your camera. 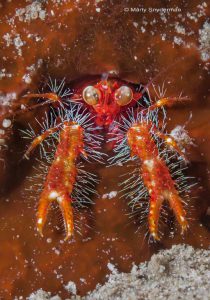 On the other end of the subject-size scale, the same macro lens and camera combinations will often work well for photographing larger subjects like balloonfish. 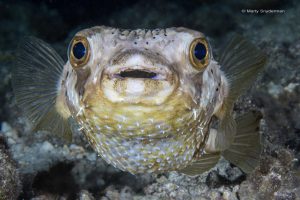 But there are a lot of even larger reef inhabitants that make wonderful photographic subjects that can be difficult to photograph well with a macro lens. That’s because using a macro lens to photograph relatively large reef creatures forces the photographer to back away from these larger subjects when trying to include the subject’s entire body in the frame. Shooting from farther away translates to image degradation due to shooting through more water and suspended particulate than you want to. Colors become less vivid, and in many scenarios, you will not have enough depth-of-field for your entire subject to be in sharp focus while using an acceptable ISO and f/stop. Images that suffer from a lack of depth-of-field when increased depth-of-field is desirable are usually quick to disappoint.

So, the question becomes “what is a good way to create a compelling photograph of a subject the size of a colony of cup corals, crinoid, medium-sized octopus, or moray eel assuming you want the entire animal in the frame?” The use of a wide-angle lens can solve the depth-of-field problem. But when using a wide-angle lens, if you get too far away from your subject many images quickly lose impact because the features in your subject that you want to emphasize become too small in the frame to command the attention of any viewer other than your mother.

These cup corals could be a great subject, but this image lacks impact. 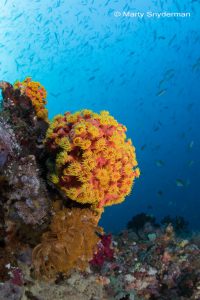 The solution to sufficient depth-of-field and maximum impact is often the use of an extremely wide-angle lens that is positioned very close to the subject. This technique can add impact, as is the case with the same cup corals highlighted in a Philippine seascape. 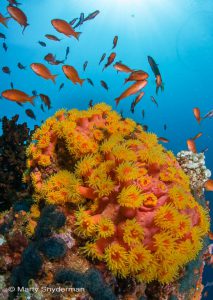 The same forced perspective technique was used to create the accompanying photograph of a Panamic green moray eel I encountered at Mexico’s Revillagigedo archipelago. To capture this image, I used a fisheye lens (a lens with a 180-degree field-of-view). The dome on my camera housing was approximately eight inches (20 cm) from the front of the moray’s face. It is easy to see how the use of a fisheye lens enabled me to emphasize the eel’s face, jaws, and fang-like teeth, elements I wanted to emphasize to draw viewers into in my photograph. I also wanted to show the animal’s body and reveal its habitat. So, forcing the perspective by using an extremely wide-angle lens and getting my lens very close to my subject allowed me to accomplish my photographic goal. 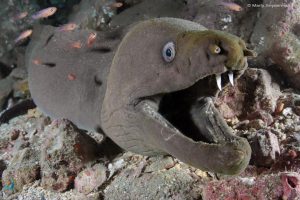 No doubt about it, forcing the perspective can be very effective in terms of helping you create compelling images that have a different look, but like every photographic technique, it should be used thoughtfully as a tool, not as the be all, end all panacea.

Previous Post
A Dive with the Giant Fish of the Amazon: The “Pirarucu”
Next Post
Join NAUI at the Scuba Show in California