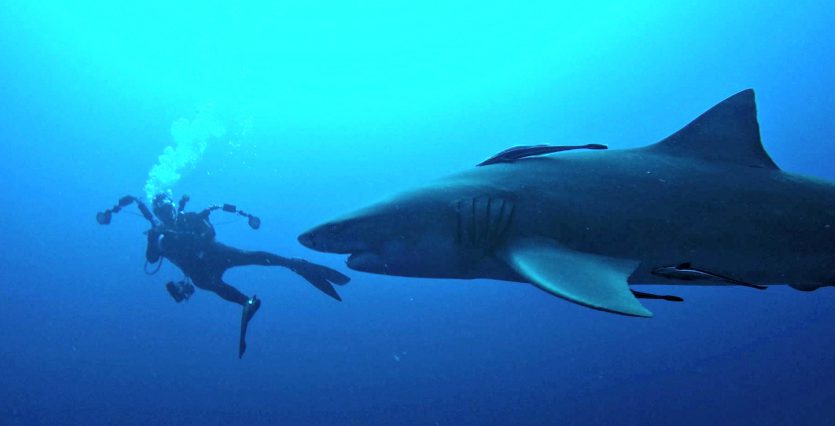 When you think of Florida’s 2,170 kilometers (1,350 miles) of ocean shoreline, it is easy to get caught up in the vision of clear, blue waters and white, pristine sand. Each year, millions of tourists and locals alike flock to the beaches to enjoy some saltwater therapy. These beaches are also overlain by many misguided Hollywood-ized shark fears that make many people apprehensive to enter the water: places where they could experience the ocean’s apex predator from a different perspective. With a large body mass and rows of razor-sharp teeth, sharks have become an object of fright to the average person. It’s only when you look beneath the surface that you find how truly impressive these creatures really are.
While some fear for their lives standing in ankle-deep water on the shoreline, many others don scuba gear and take to the water in search of the ocean’s top carnivores. Florida’s Treasure Coast is one of the world’s top destinations for diving with sharks. Here, the Gulf Stream travels closest to the Florida Peninsula and brings many of the ocean’s transient species to the neighboring natural and artificial reefs. With its favorable water clarity, nature photographers, recreational marine biologists and thrill-seekers visit the area to get an up-close encounter with these remarkable creatures.

The waters off Jupiter, Florida, are home to an annual aggregation of lemon sharks from late winter to early spring. During this time, female lemon sharks return to the area to give birth and are followed by their male counterparts. During the winter months, cooler waters bring other species like the tiger sharks, hammerheads, dusky and silky sharks roaming the reef lines closer to shore in search of food. This is primetime for scuba divers to encounter several different species, often on the same dive.

As if getting in the water with large predators isn’t thrilling enough, some scuba diving operations offer provisioned dives where chum (cut-up dead fish) is brought into the water to be fed to sharks that gather as they follow the scent. Sharks have an acute sense of smell and are able to detect chemical signatures (i.e., blood) from prey great distances away. This provisioning has caused some controversy in the scuba diving community, as it has the potential of creating a dangerous situation for less-skilled scuba divers or for ones who might simply be in the wrong place at the wrong time.

While some scientific research suggests evidence that provisioning does not alter some shark species’ natural behavior, lemon sharks are now commonly found residing year-round in the same sites where they are being fed. This practice has become polarizing in recent months after several accidents involving shark feeding and spearfishing have occurred, highlighting the potential dangers these actions can bring. On the other hand, in the proper setting, it can also show that sharks are not the man-eating killers they are portrayed to be. Up-close interactions with sharks in a serene setting exemplify to underwater enthusiasts the fact that humans have more chance of being killed by falling vending machines.

Sharks have intrigued and captured the minds of researchers at Nova Southeastern University’s Guy Harvey Research Institute and the University of Miami’s Shark Research and Conservation Program. These two educational and research facilities, located on Florida’s east coast, have provided both students and researchers with an exceptional opportunity to examine the several species inhabiting these waters. Each program is taking on various projects to further our understanding of these species.

By examining interactions between sharks and humans, we can realize how both species are affected. As we learn more, we are able to deepen our understanding of the ocean environment and see that sharks are an integral part of the food web that drives these complex ecosystems. Ultimately, instead of triggering the theme music from Jaws and a frantic scramble for the safety of shore, we may finally come to respect the beauty and power of these apex animals.