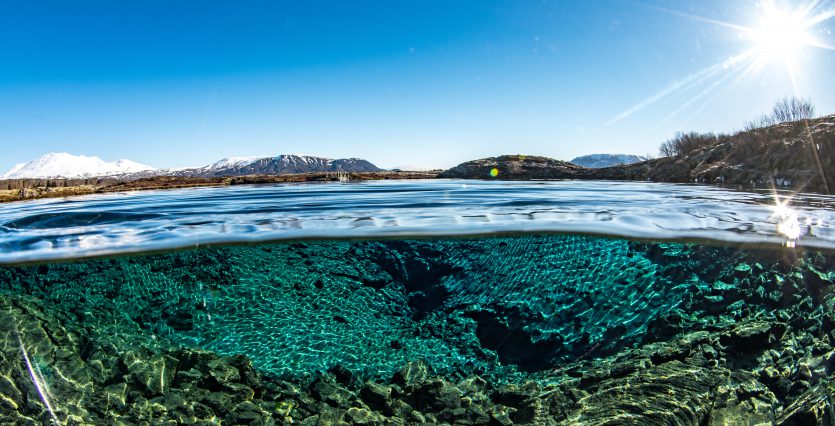 A number of years ago, I visited Crystal River, Florida, in the hopes of photographing manatees. As it turned out, I was about a month early, and there weren’t too many manatees to be found at their favorite freshwater springs and hangouts. As we sat on our guide’s boat and lamented the lack of action, he told us about a river where we could encounter “60-meter (200-foot) visibility, bass and gar everywhere you look, a white sandy bottom, turtles, ducks and even an occasional gator.” “Where is this?” I asked. It sounded too good to be true. “Just a half-hour away, in Dunnellon,” he responded. “So what are we doing here?” I asked. “Let’s go.”

My dive buddy looked at me as if to say, “Are you serious?” I knew exactly what he was thinking: If I had a dollar for every dive site whose grandeur was overexaggerated, I’d be retired by now. But half an hour later, we were riding his pontoon boat up-river toward Rainbow River’s headspring, a spring that vents between 1.5-2.3 million cubic meters (400-600 million gallons) of the clearest 22 degrees Celsius (72 degrees Fahrenheit) water that we’d ever seen. The experience of motoring up the river was surreal. The water was so clear that it felt as if the boat floated on air. Every fish and sand ripple on the bottom was clearly visible from the surface without the need for a mask, and the experience just kept getting better.

The second we entered the water, I was blown away. Our guide’s description hadn’t done Rainbow River justice. The visibility was as good as promised, but the colors, abundance of wildlife and the uniqueness of the experience far exceeded anything I had dreamed possible. Schools of largemouth bass stared back at me through reed stems, ancient-looking gar patrolled the shadows of the riverbanks, an otter played along the riverbank, and all the while, tiny little rainbows danced along the white sandy bottom — created by the prism-like ripples on the surface of the water. From that moment on, I was a freshwater diving fan. Having been raised on saltwater diving, it had never dawned on me that freshwater diving could be so incredible. A whole new world of diving possibilities opened up to me that day.

As we climbed back aboard the boat, our guide remembered part of the briefing he forgot to mention earlier: “Oh yeah, I’d be careful swimming under those weed rafts at the side of the river if I were you.” “Why?” I asked, but I think I already knew the answer. “You don’t want to disturb a 3-meter (10-foot) gator that might be resting on top,” he answered nonchalantly. Despite the vision of what could happen if I did that, I was stoked to switch tanks and dive back in — I was hooked on freshwater diving.

Five Freshwater Destinations That Should Be Top On Your List

In the world of dive travel, it’s not often that you hear of people planning a long-haul trip to dive Lake Dark-and-Silty or the Oh-So-Murky River. Most freshwater dive sites are often utilized by local dive operations as a means of getting divers certified and keeping them active when not traveling. The conditions in many of these freshwater bodies are usually less than optimal, yet nearly everywhere you go, there exists at least a few “premium” freshwater dive sites — places where the visibility might be better, there’s a shipwreck to explore or some other point of interest. On occasion, you might even encounter a rare jewel of a freshwater dive that’s quite spectacular. Take, for example, the petrified forest in Clear Lake, Oregon, or the lost city of Shicheng in China, or the crystal-clear mountain lakes of Switzerland. Yet as spectacular as those sites might be, most people don’t plan a long trip just to visit a single dive site. Dive travel is usually planned around destinations that offer a wide range of dives and topside adventures to boot, but there are a number of freshwater destinations that qualify as true dive destinations. We’ve put together a list of five freshwater destinations you might want to plan a trip around.

So, the next time you’re planning a trip for yourself or a group trip for your clients who are looking for something out of the ordinary, think of some of the adventures you could have at any of these great destinations. And, there’s one more huge bonus to diving freshwater — a lot less gear cleaning afterward!