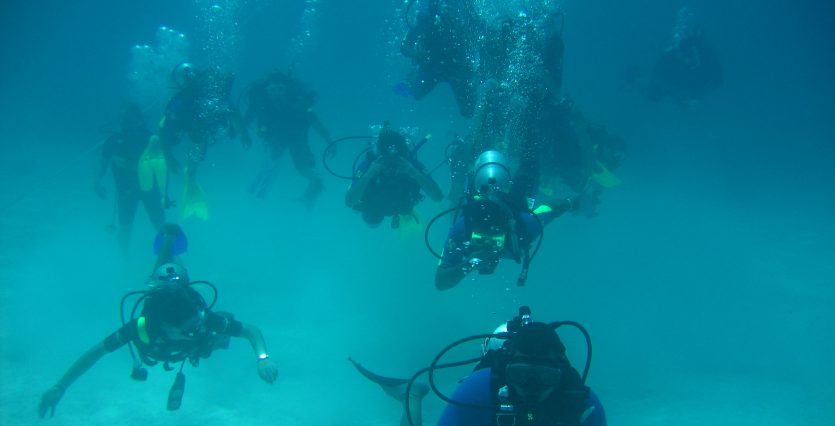 This article is about being in charge of your own dive and not following someone else to your own detriment.

Those of us who have been diving for a long time can easily forget what it’s like to be a new or inexperienced diver. What may seem obvious to us may not be obvious to someone new to the sport, and we are often given instant credibility whether we deserve it or not. So here is a story that happened this August that is a good reminder of the principle of being in charge of your own dive.

Most of my diving is leading some sort of student, so when an opportunity came for my primary SEAkers divemaster, Kevin, and me to do a dive on our own, I was excited! No need to worry about anyone else, just enjoy the dive.

We were in the Bahamas, and we planned to dive a blue hole and Barracuda Reef. Nothing too difficult and no students; we were ready for a fun dive. We arrived at the dive shop in Nassau to find out the dive site had changed due to weather conditions, and we were going to dive “The Wall,” a 1,800-meter (6,000-foot) drop off the continental shelf. No problem — the dive sounded interesting and still no one to look after. The boat captain was watching the weather and staying on top of things. 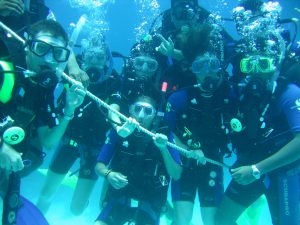 We rode to the dive site, and the captain briefed the dive. I found it odd that the boat captain was briefing this dive and not one of the divemasters. Whatever, the dive briefing was well done, and he set the maximum depth at 27 meters (90 feet).

Unfortunately for Kevin and me, we were told everyone would follow the divemaster. We were planning to dive on our own, and there were 15 divers! OK, we will follow, this dive was just getting easier and easier. We entered the water and made a free descent to 21 meters (70 feet). The divemasters got all the divers together on the bottom, and the lead divemaster started toward the wall with the other divemaster in position at the rear of the formation. Then the dive started going south. Instead of stopping at 27 meters (90 feet) on the wall, the lead divemaster descended to 37 meters (120 feet) and leveled off. Everyone followed him down. Only three people were diving with computers, so many of the divers had no idea what their time at that depth should be. Kevin and I stayed at the rear of the formation and about 6-9 meters (20-30 feet) above the rest of the divers to conserve our bottom time and air. The others were only at depth for several minutes, but with the total time of the dive, it was too much. The divemaster turned the dive at about 15 minutes and came up off the wall to shallower water, about 21 meters (70 feet). By now, I was under a decompression obligation. I swam the distance to the front of the formation to get closer to the divemaster and let him know that the group needed to ascend.

About this time, a diver signaled to the lead divemaster that he was low on air. The divemaster offered his octopus, and both swam off for the boat at a quick pace. I was now in the lead and signaling everyone to come up to shallower depth. But I was just another diver to them. Kevin and I had ascended to 12 meters (40 feet); everyone else was still at 18 meters (60 feet). As I made my way toward the anchor line, still under a decompression obligation, I turned and saw a few divers going to the surface. When I reached the anchor line, there were three or four divers at the surface; the others were at the anchor line with me. I cleared deco and made my way up with everyone else.

Everyone made it onto the boat with no apparent issues. After we were all settled in, I went to speak to the captain and explained to him the dive, depth and decompression issues. I asked him where the oxygen was and said that some divers should not be going back in the water. Another experienced diver on the boat had a similar discussion with the captain.

On the way to the next dive site, the captain addressed the passengers. He said that maybe some should not re-enter the water due to the issues on the last dive. He scolded everyone for exceeding the depth that he set during the briefing. He told them that they alone were responsible for their dive profiles, and they shouldn’t blindly follow someone else down to deeper depths. I spoke up and told the captain that I agreed in principle with his comments on depth, but new divers will follow blindly, and we need to remember this. The divemaster should have never led the divers into a required decompression dive.

I went around checking on the divers, and everyone said they felt fine. I told them they should consider not diving again. The captain then let everyone back in the water for a second dive to 14 meters (45 feet). Kevin overheard divers saying that everything must be fine, that the boat didn’t want dead divers so they would not do anything wrong. I also found out that there were some brand-new divers on board.

So what’s the moral? For all divers, plan your dive and dive your plan. Don’t follow someone else assuming they know what they are doing. Be in charge of your own dive. If something is not going according to plan, take a moment and evaluate. Err on the side of safety. For dive leaders, we are always being watched and followed. Take a moment to reflect on what it is like to be a brand-new diver.