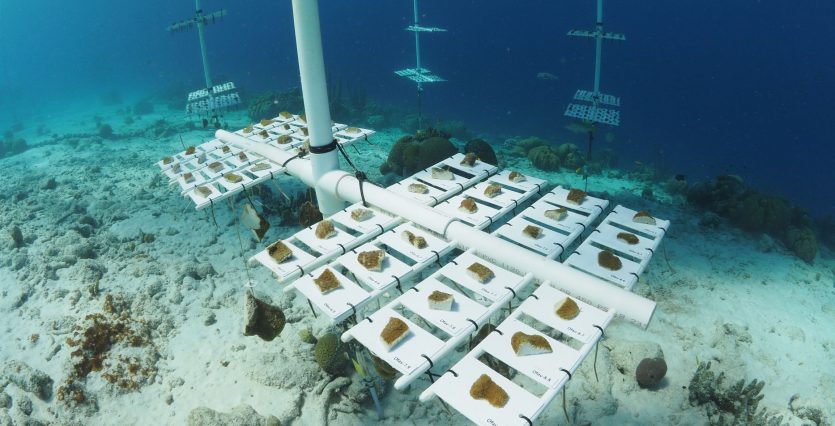 A “Boulder” Approach to Reef Restoration

In a first for the Foundation and the island of Bonaire, Reef Renewal Foundation Bonaire (RRFB) has started growing three species of boulder corals in its nurseries. These three coral species are among the most common reef-builders that make up Bonaire’s reefs – lobed star coral (Orbicella annularis), mountainous star coral (Orbicella faveolata), and great star coral (Montastraea cavernosa).

Since 2013, RRFB has primarily focused its restoration work on two branching coral species – elkhorn (Acropora palmata) and staghorn (Acropora cervicornis) – as these corals have experienced a drastic decline in population since the 1970s. However, over the last decade, in Bonaire as well as throughout the greater Caribbean region, other coral species, including large reef-building coral species like boulder corals, have experienced a significant loss in cover and abundance on coral reefs.

Recent developments have led to breakthrough methods of propagating boulder corals via fragmentation in both land-based and offshore nurseries, and RRFB was eager to incorporate these techniques to expand its restoration effort with a focus on the importance of species diversity.

Using a modified coral tree nursery, which was installed earlier this month, RRFB has populated four trees with 300 coral fragments. These fragments came from a few initial parent colonies that were collected by RRFB staff, under the supervision of the Bonaire National Marine Park, from four dive sites around Bonaire and Klein Bonaire.

“These new species are a key part to our broader, more inclusive reef restoration approach. Through the addition of these species to our restoration program, we will be better suited to accelerate the recovery of damaged reefs by increasing the diversity and complexity of coral communities,” said Francesca Virdis, Project Coordinator of Reef Renewal Foundation Bonaire. Regardless of the species of coral or the technique, restoring Bonaire’s coral reefs to the resilient, healthy ecosystems they used to be will continue to be a community effort.

This project startup has been fully funded by Cargill Bonaire and the Cargill Global Partnership fund. Virdis is extremely positive about the initiative that Cargill has shown and continues to show RRFB. “Cargill’s support demonstrates to the community their commitment to sustainability. It is important for us to have the community involved in the restoration of our reefs and we are very grateful to Cargill for believing in and backing this project.”

RRFB will continue growing and propagating these boulder corals in their coral nursery with the goal of scaling up production to produce thousands of fragments a year. These fragments will be outplanted back onto the reefs at new and existing restoration sites around Bonaire as a part of the ongoing coral restoration effort.