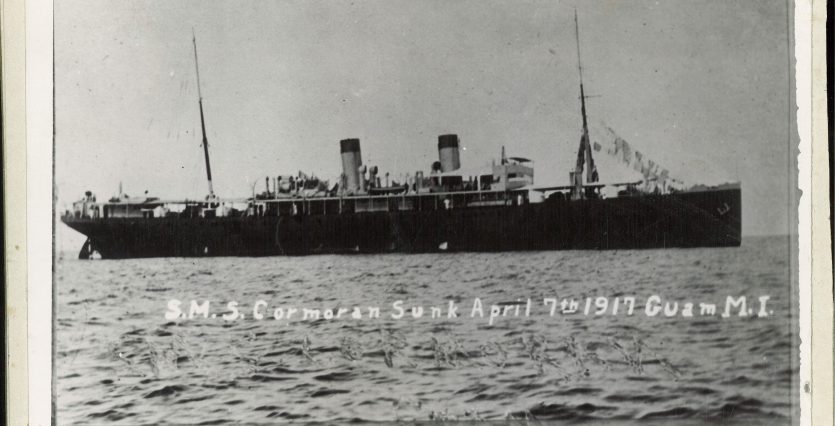 Where the United States Entered World War I: The SMS Cormoran

On Friday, April 7, 2017, the Guam Visitors Bureau commemorated the 100th anniversary of the scuttling of the SMS Cormoran II, a ship that holds a unique place in history for both Guam and the United States — an unusual role for a German ship.

The ship was built in Germany to be part of the Russian merchant fleet as a combination passenger, cargo and mail carrier, and was originally named the SS Ryazan by Russia. With the advent of World War I, Russia and Germany became enemies. On August 4, 1914, the Ryazan was captured by the SMS Emden of Germany. The Ryazan was taken to Tsingtao, in the German colony of Kiautschou in Qingdao, China, where it was converted into an armed merchant raider using the armaments from a damaged ship that could no longer sail. It was rechristened with the name of the ship whose guns had been used to re-outfit it. The Ryazan was now the SMS Cormoran II.

On August 10, 1914, the Cormoran left Tsingtao and began a voyage through the South Pacific Ocean. It was immediately discovered by Japanese warships, who chased it throughout the South Pacific until the Cormoran finally sailed into Apra Harbor, Guam, on December 14, nearly out of coal and with nowhere else to go. Guam had become a U.S. territory in 1898 as a result of the Spanish-American War.

The United States was not a participant in World War I at the time, but relations with Germany were strained. The island also had limited amounts of coal in its own stores, and U.S. Naval Governor William J. Maxwell would only provide the Cormoran with a tiny amount of coal — not enough to reach any safe haven.

Unable to leave, the Cormoran remained in Apra Harbor with the crew forced to remain on board. The standoff between Governor Maxwell and the Cormoran’s Capt. K. Adalbert Zuckschwerdt lasted for two years until Maxwell became sick and was replaced. The interim governor, William P. Cronan, felt the ship’s crew should be treated in a friendlier manner, declared them guests of the United States, and allowed them to leave the ship, though he would not refuel the vessel either.

The new amicable relationship lasted for six months, with the Cormoran crew coming and going freely. The men of the ship achieved minor celebrity status among the local Chamorro people. The bonds of friendship remained well and strong until April 6, 1917, the day the United States entered World War I (April 7 across the International Dateline in Guam).

Wireless messages were immediately sent to all overseas bases, including Guam. The new naval governor, Roy Smith, ordered Capt. Zuckschwerdt to surrender his ship. But rather than do so, Zuckschwerdt decided to scuttle the Cormoran and send it to the bottom of the harbor. The small U.S. garrison on Guam saw the crew preparing to scuttle the Cormoran and fired a warning shot across the bow in an attempt to prevent the act. The first shot fired by the United States in World War I was therefore not in the Atlantic or in Europe, but in Guam.

Zuckschwerdt commanded the crew to detonate an explosive charge that had been placed in the Cormoran, abandon ship and swim ashore. Seven sailors died in the scuttling, though only six bodies were recovered. Despite the wartime conditions, the friendly relationship between the people of Guam and the crew persisted, and the six sailors were buried with military honors in the Agana U.S. Naval Cemetery. Their graves are still well marked and cared for and surround a monument to the Cormoran. The crew was sent to the United States as prisoners of war but then returned to their native Germany at war’s end.

The SMS Cormoran lies at 34 meters (110 feet). At the end of the war, the U.S. Navy conducted a salvage operation on the vessel and was able to recover the ship’s bell. The bell was on exhibit at the U.S. Naval Academy Museum in Annapolis, Maryland, but, sadly, was later stolen. Divers have recovered many more artifacts from the Cormoran over the years, and many were donated to the National Park Service in Piti, Guam.

During World War II, the Japanese transport ship Tokai Maru was sunk by the U.S. Navy while in Apra Harbor and came to rest leaning against the Cormoran. Today divers in Guam have a unique opportunity to dive two shipwrecks from two wars on a single dive.

You can see an exciting tale of the Cormoran on The Great War channel on YouTube: