As underwater photographers, it is usually relatively easy to capture the attention of audiences by sharing images of a whale shark, manta ray, or other relatively large marine creature. 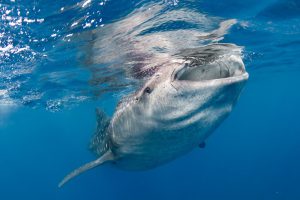 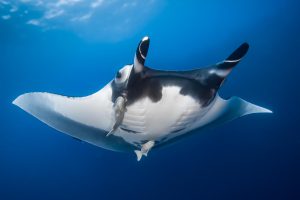 Including a diver (or divers) in your frame with Mr. Big can transform an interesting image into an “oohs” and “aahs” crowd pleaser. 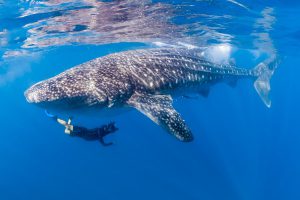 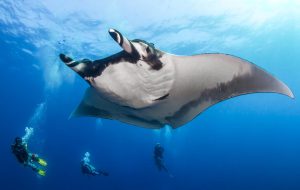 Certainly, adding a diver can provide perspective regarding the size of any subject. Of equal importance, including a diver in a photograph often helps viewers “connect to a scene emotionally” as they often imagine themselves to be the diver. Imagining “being there” can provide a far more intimate and intense viewing experience than viewers get when they just look at a photograph and move on. Do viewers feel fear, joy, in awe of Mother Nature, or any of many other emotions? For members of an audience, photographs that create those types of questions and feelings can make an impression that is powerful and long-lasting.

Showing a diver in an “edgy” situation, as might be perceived to be the case with the diver in the frame with the great hammerhead, can certainly garner attention. 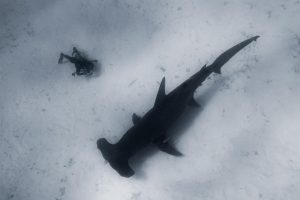 But it is not only a diver in close proximity to a large sea creature that can increase the impact an image has. The inclusion of a diver, or divers, can also add perspective and create a powerful impression with rather small marine animals like a giant kelpfish trying to hide in and around blades of giant kelp. 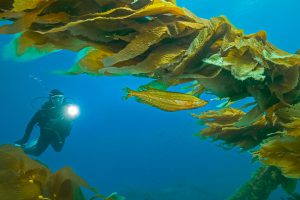 While this tight shot of a giant kelpfish swimming amongst blades of giant kelp is a nice shot of the fish, unless you are familiar with giant kelp and/or giant kelpfish, as a viewer it is not really possible to be sure you have a good understanding about the size of the fish or the setting. 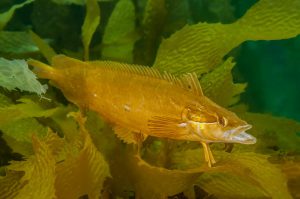 The same point can be seen by noting how the diver adds perspective to a shot of an elephant ear sponge. 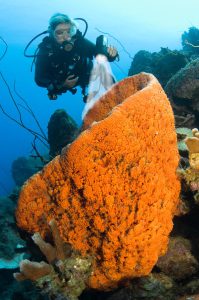 As divers who are familiar with the underwater realm, it is easy to forget that creatures we commonly encounter often seem “other worldly” to non-divers. When sharing photographs with non-divers, we are almost certain to be asked about the sizes of the subjects we show. In a recent presentation, I was asked “if a wolf eel was as big as a nudibranch?” While there might be an initial tendency to laugh at the question, I use those experiences to remind myself about the lack of familiarity and understanding many non-divers have about the underwater world and the creatures we encounter.

The way I see things, the important result from making a presentation is not how loud or long the applause is, but whether or not as photographers we are able to share something with our audience that helps them gain a better understanding of life beneath the waves. Adding divers to some frames can help accomplish that goal.

Here is another example of a situation in which adding a diver in a scene helped viewers gain some perspective about the size of a shark in a photograph. This is the first picture I showed. 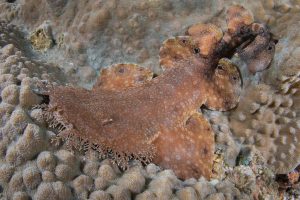 When the image came up on the screen, I stated that the subject is a type of shark known as a tassled wobbegong and that I made the photograph in a remote site in Indonesia. As you might imagine, hearing the words “a shark in a remote setting” created a sense of uneasiness, even fear among some non-divers. Some likely questioned my sanity.

Then I showed a shot of a diver looking at the same tassled wobbegong, a rather small shark that was believed to be approximately two weeks old. 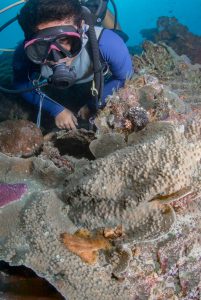 Any sense of uneasiness and fear instantly vanished. Those feelings and suspicions about me being a daredevil were replaced by an appreciation for Mother Nature. The diver in the scene completely changed the way the subject and the overall scene were received.

An important point to emphasize is that achieving the desired impact from adding a diver to a scene requires more than just simply including the diver somewhere in the frame. As a rule, you want to emphasize the subject the diver is relating to, not the diver. To accomplish this goal, in the vast majority of instances you will want to have the diver farther away from your lens than the subject is. That is what I did when making the following image of a videographer and soft coral on a reef in southern California. 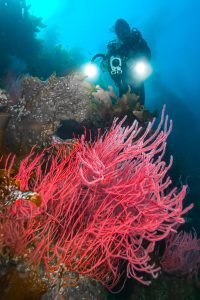 While farther away is often ideal, in many instances if the diver (or in this case, snorkeler) is essentially the same distance from the lens, viewers gain perspective regarding the size of the subject without any downside being introduced by the presence of the diver. 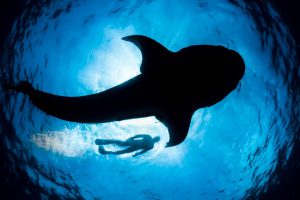 But when a diver is closer to the camera than the subject, as was the case when I made this silhouette of a diver and an oceanic manta ray, the subject often looks smaller than the photographer wants it to. As a result, the impact made by the image is less than what might have been possible had I composed my frame so that the diver had been equidistant from the lens or farther away from the lens than the manta ray.

In addition, sometimes a diver in the foreground prevents viewers from getting a clean look at the subject.

Showing the diver’s eyes and lighting their face can also add impact by sharing any emotion or intensity the diver appears to feel. At least, this is the case as long as the diver is looking at the main subject. If the diver is looking elsewhere, the diver is highly likely to be a distraction. While not always possible, lighting a diver’s face usually helps viewers “connect” to the experience. I think that many viewers connect with this image of a diver looking at a lion’s mane jellyfish in British Columbia because intensity seen in the diver’s eyes and facial expression. 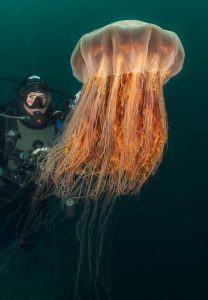 In closing, I do not want to leave the impression that photographs that include divers are superior to or better than photographs that do not include divers. Clean portraits of animals and seascapes without divers can be very powerful in their own right. In this piece, I am making the point that including divers in photographs can help viewers gain perspective regarding the size of subjects and help them feel what it might be like to be the diver in the shot. Working as a team with divers that might be in your photographs is an additional topic for another day. For now, I hope you see what the benefits of including a diver in some of your images can be.

Ultimately, how you decide to treat any photographic opportunity is up to you and the statement you want to make with your image.

Previous Post
Water Snakes: Everything You Need To Know