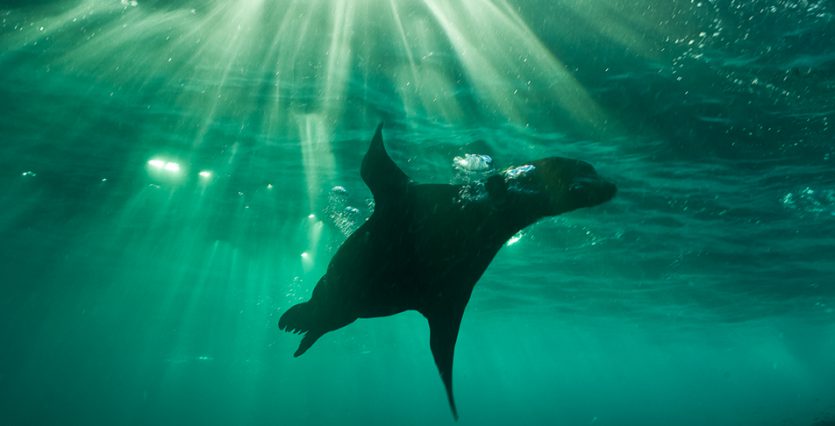 Underwater Photography: Know Where the Sun Is

When I first began to seriously pursue my interest in underwater photography back in the mid-1970s, I was very fortunate to work as a diving instructor and store manager at a dive center in San Diego that was routinely visited by several National Geographic staff photographers. The dive center was owned by Chuck Nicklin, and he was an assignment photographer and cinematographer who worked on numerous underwater films produced in Hollywood as well as on television documentaries and IMAX movies. Simply put, I was a guy who was lucky to be in the right place at the right time to meet people who were already living the professional life I wanted to live.

One day while walking down the street with several of the National Geographic photographers to help them acquire some parts for a prop they wanted to build, one of the photographers turned to a second photographer and said one word, “sun”. The second photographer immediately pointed toward the sun. His near-instantaneous response saved him from having to buy a beer for everyone that evening.

The scenario was my introduction to a game played by the photographers that helped them always be aware of where light is coming from at any given instant. The lesson for me was that if always knowing where the sun is was that fundamentally important to that group of photographers, it should be important to me. I consider the lesson I learned that day to be extremely valuable in my pursuit of photography, and hopefully, this column imparts the benefit of that knowledge to you. 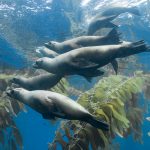 It is often said that photography can be described as painting with light. In underwater photography, light can come from two sources: one, a manmade source such as a strobe, video light, or dive light; or two, the sun. In this column, I am going to share some thoughts about using the sun to your advantage when creating photographs underwater.

In terms of adding or detracting from an underwater photograph, the sun can be your “best friend” or your “worst enemy.” Given the wide range of impact the sun can have on an image, it is always wise to know where the sun is in relation to you and your subject, and if and how light from the sun is likely to impact a given picture.

Generally speaking, composing a frame that is shot with the lens facing the sun exposes a weakness in digital technology. That said, the technology is improving, and exactly how shooting toward the sun will impact your photographs can be highly dependent upon the specific model of your camera. So, you might need to do some experimenting with your camera. 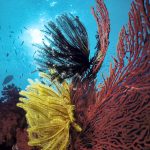 The issue centers upon how a sunburst and streaks of sunlight in the water look in your images. You want to ask yourself, “If the ball of the sun (sunburst) looks like a bright white, roughly circular orb like it so often does when you directly toward the sun when you are underwater?” as is the case in this seascape featuring crinoids perched on a sea fan.

Or in your images does the sun ball look very unnatural, and more like a very distracting cyan, or otherwise funky-colored, pool of light as seen here. 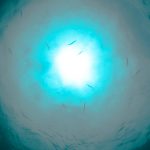 If the ball of the sun looks natural to your eyes in the images you create with your camera system, you can probably compose some compelling photographs that include the sun in your frames. On the other hand, if the sunburst usually has an unnatural appearance, it is probably best to keep the sunburst out of your photographs. 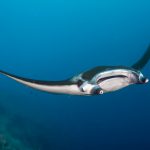 The same is true about rays of sunlight as they penetrate the water column. The rays are not always present even on sunny days in clear, shallow water.

But when the rays can be seen, the question to ask yourself is, “Do the rays have a natural appearance in photographs captured by my camera?” as they do in this photograph of a manatee. 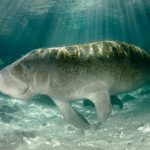 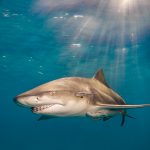 By comparing this image with the previous shot of a lemon shark, it is easy to see how much visual appeal the rays of sunlight can add to a photograph. 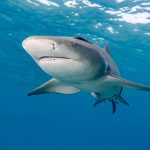 If your camera records the sunburst in ways that are not pleasing to your eyes, and for any reason, you are unable to compose a frame that excludes the ball of the sun, you might be able to create a compelling photograph if you almost totally block the sun ball with another element in the frame. This is a commonly used technique when creating silhouettes. 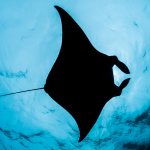 Even if the sunburst is not in your frame, it is often to your advantage to compose your wide-angle photographs with the sun at your back so that the sun pleasingly lights your subjects. This is especially true early and late in the day when you are not using a strobe to light your subject as is the case when photographing relatively large subjects that are too far away and too big to be lit by a strobe. 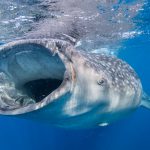 By comparison, shooting toward the sun often results in disappointing results. 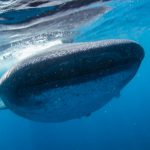 The bottom line is being aware of where the sun is and the ambiance created by rays of sunlight in the water column can help you add visual appeal to your images while failing to have this awareness can lead to missed opportunities and disappointment. 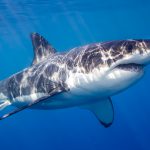