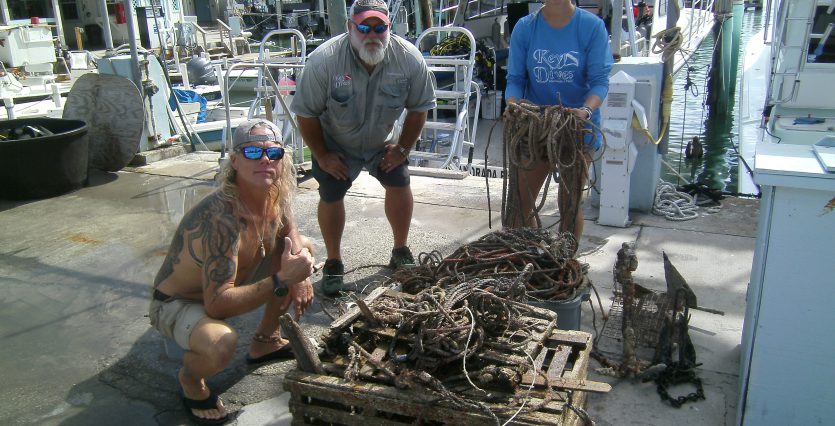 Key Dives dive instructor Courtney Benson briefed 16 divers who had gathered for a reef cleanup, “If it has become part of the reef or it would break coral to remove, it show it to your dive guide. A determination can be made to leave it alone or remove it. Dive guides all have lift bags for heavy items. Dive safety is the most important consideration. Check your air and computers.”

“We are proud to be a Blue Star Operator. We have been doing reef cleanups since we began operations here. While we have always removed plastic and trash from the reefs, a government grant after Hurricane Irma has enabled us to take local divers out without charge to participate in organized reef cleanup dives on a regular basis,” Mike Goldberg, owner of Key Dives in Islamorada, explained.

Mike and his Key Dives team have embarked on a series of environmental initiatives that offer incentives to divers to help protect the ocean environment. In a program called “Paradise Doesn’t Need Plastic,” Key Dives purchased 5,000 permanent red shopping bags with their logo. They give them away to use at store checkouts instead of plastic. Permanent straws and eating utensils have also formed a part of Key Dives initiatives to decrease the amount of plastic that finds its way into the ocean environment.

Our Sunday dive was a special event. It marked the eighth cleanup dive of winter season. Florida Keys Brewing Company in Islamorada would host a party for all divers that participated. Local merchants donated prizes for a raffle.

Key Dives operations manager Jason Adams tried to tie the previous record of twenty anchors by hauling up quite a load on our cleanup day. He patiently untangled or cut anchor lines that tangled around coral. In the absence of moorings in many places fishermen and boaters still anchor. Many carelessly land on reefs, their chains and lines breaking coral. Modern anchor lines do not degrade. Wave action will cause lines to shift on coral continuing to break fragile growth.

Adam’s tally, with the efforts of two other teams led by Benson and dive instructor Mike Ryan, was 14 anchors with lines. Mesh bags bulged with monofilament, cans, and plastic trash. Benson removed a derelict lobster trap using a lift bag. On two successive dives within sight of the Alligator Reef marker, 456 pounds of trash was removed from the ocean.

Goldberg captained the vessel this Sunday, taking divers to sites that needed a helping hand. By the end of the second dive the transom was loaded with debris.

Dockside trash was sorted and weighed so that reports could be made. Onlookers asked if they could have corroded anchors for their yards, a perfect end to something that once littered the ocean floor breaking coral. Non-recyclable trash was placed in a commercial dumpster.

“Our total is 4,012 pounds (1,820 kilograms) of trash. Eighty-six divers have participated during our eight cleanup trips so far,” Benson said at the after-dive party. Florida Keys Brewing Company offered their beer garden for divers hosting free beer. With each cleanup trip divers receive a raffle ticket. Those who gathered at the party received free permanent shopping bags, permanent straws with a cleaning brush, a “Dive Against Debris” discount coupon for store purchases, and a Blue Marlin bracelet made by Armando Gonzalez crafted from lines recovered by cleanup divers. In addition, raffle prizes included $50 gift certificates to Mrs. Mac’s Kitchen and Marker 88 Restaurant, a $25 gift certificate to Lazy Days Restaurant, three tickets to the History of Diving Museum, and a $70 value dive bag from Key Dives.

Many dive operators have taken important initiatives toward protecting reefs by removing debris from the ocean. Continuing efforts by Key Dives and others will help insure that Florida’s reefs remain viable and healthy.

For more information or to participate in a “Dive Against Debris” contact Key Dives at 305 664 2211 or go to www.keydives.com.