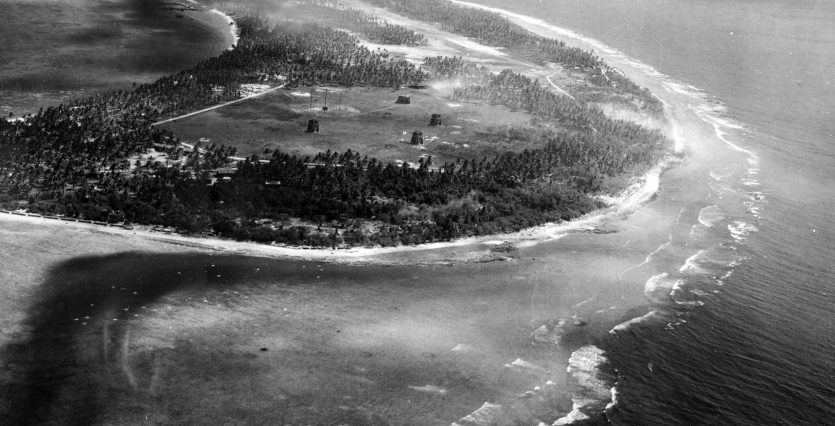 About 2,500 miles southwest of Hawaii lies one of the world’s largest coral atolls with a lagoon that contains nearly 850 square miles of the world’s best diving. The lagoon is filled with warm, crystal clear blue water with a sugar-white sandy bottom that averages 150 feet and maxes out at 200 feet. A combination of WWII Japanese shipwrecks, both U.S. and Japanese aircraft, and pristine coral reefs loaded with colorful reef fish and apex predators make diving this place a rare treat. Above water, perfection doesn’t end. Located near the equator the air temperature stays steady in the mid-80’s year-round and the water temperature only fluctuates a whopping 5º F from 80º – 85º F. Sound like a diver’s paradise? It is, there’s only one hitch. You have to be invited here to be able to dive it.

Kwajalein is one of the Republic of the Marshall Islands’ coral atolls, but one thing that makes it so unique is that it’s an active U.S. Military facility. In other words, you can’t just buy a plane ticket and head there for your next dive vacation. You need to know one of the nearly 1,200 people living and working on the base to get sponsored. Only a handful of those people are active military personnel, most of Kwajalein’s residents are civilian contractors working on scientific projects like radar or long-range missile testing. One of those residents, Doug Hepler (NAUI 32120), has been living on Kwajalein and raising his family there since 1995. Doug’s a school teacher at the Kwajalein Junior/Senior High School where he teaches industrial arts and 8th-grade history. While his in-school lessons are sure to be great, it’s his after school activities which are the envy of any diver or NAUI instructor.

Doug is a member of the Kwajalein Scuba Club, the world’s most active and safest scuba club. Their safety record is verified by DAN, while their 1,000+ tank fills per month are a sure indicator of the club’s activity level. With some of the world’s greatest diving available 24-7 and no crowds of people to spoil the fun, who wouldn’t dive their brains out. After all, there’s not a lot else to do on a tiny island in the middle of the Pacific Ocean. While there are some long-term residents like Doug, most people come to live and work on the island for a few years. This brings a constant flow of potential new divers to the small population. Since there’s no dive shop on the island, the Kwajalein Scuba Club is where people go to get connected with instructors. There’s a list of instructors posted on their website (http://kwajaleinscubaclub.com/).

The only NAUI instructor in the club, Doug is known for his skill with ‘problem’ students. His passion is teaching the “challenges,” as he puts it. While he’s taught Rescue Diver and Advanced Scuba Diver courses, he enjoys teaching beginners the most – especially the tough ones. “It’s gratifying to me to take someone who’s scared and a couple of months later they’re not only certified, but they’re showing other divers wrecks,” says Doug. Since they’re about 16 hours ahead of the U.S. East Coast, the Kwajalein workweek is Tuesday to Saturday. That said, another of Doug’s favorite diving activities is his Saturday after school dive with his students. School gets out at 3 PM. They’re in the water and home in time for dinner. After all, they don’t have to go very far to get to good diving. There are reefs and wrecks literally in their backyards.

About 90 percent of Doug’s diving is conducted from shore. Most of the residents do about 50/50 shore to boat dive ratio, as many of the wrecks and other dive sites aren’t accessible from the main island at the southernmost part of the atoll.

Of the wrecks that are nearby, there’s a 90-foot long American landing craft that sunk in a typhoon in 1979 in just 25 feet of water and a 120-foot unnamed Japanese patrol boat sitting upright in 50 feet of water. The lagoon was filled with WWII Japanese ships, both naval and merchant when the U.S. launched Operation Flintlock in January/February of 1944. Flintlock was so successful that only a handful of the 8,000 Japanese troops on Kwajalein at the time survived, almost all of their aircraft were destroyed and just about anything that had been floating in the lagoon was sent to the bottom. All of these wartime wrecks are littered with artifacts, but taking artifacts is strictly prohibited out of respect to those who fell in battle.

In addition to the WWII shipwrecks, the Prinz Eugen, the only major ship of the German navy to have survived WWII, rests upside down on the bottom of the lagoon. She survived two nuclear bomb blasts at the nearby Bikini Atoll and was towed there where she sprang a leak and rolled over. The wreck starts at the surface in shallow water and goes to a depth of 120 feet. It’s possible to swim under the hull and get in that way. There’s also a graveyard of WWII era U.S. planes in the northern section of the lagoon. It was more economical to dump the planes in the ocean than to return them to the U.S. for retirement after the war. And, last but not least, an assortment of scrapped or typhoon-ravaged U.S. ships have gone to the bottom over the years as well. In other words… Kwajalein is a wreck diver’s dream come true.

In addition to the wrecks, Doug’s dream sites also include incredible reef diving sites like Troy’s Coral Head where you can park yourself at 80 feet and watch the grey, black and white tip sharks swim by “as if you were watching the traffic pass on a freeway,” says Doug. Another favorite dive is called The City, where coral pinnacles 20 to 30 feet around stick straight out of the pure white sand like skyscrapers. At a different ‘City,’ named Fish City the small coral heads are packed so densely with anthias, anemonefish, and other schools that they totally obscure the view of the corals beneath them.

While Doug loves sharing these underwater wonders with his fellow club members and new students, he’s passed his love for diving onto the most important people in his life – his children. He has five kids between the ages of 20 and 3. All but the three-year-old are certified divers. Doug taught them all to dive as soon as they were ten. While most kids back on the continent come home from school to play whiffle ball in the back yard, Doug’s kids explore the mind-blowing wrecks and reefs of Kwajalein Atoll. Doug may teach history at school, but it’s exploring the real-life history beneath the waves that will truly be a history lesson his kids will never forget.

Previous Post
Bridging the Gap: Hooking the Next Generation
Next Post
The Demands of Training the Public Safety Diver