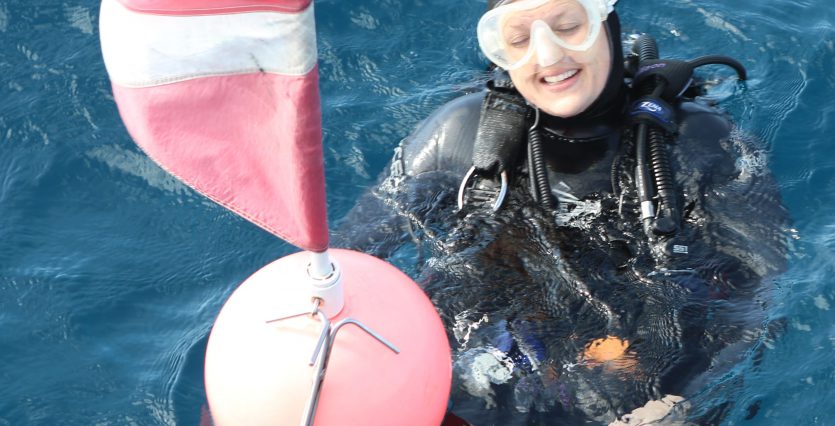 The Genesis of the Divers Flag

The first mention of a proposed diver ﬂag was in the September 1957 issue of Skin Diver Magazine [SDM]. Michigan native Ted Nixon announced the need for a ﬂag exclusively to denote recreational diving activity and requested suggestions for designs that could be accepted nationally.

In the ensuing months, considerable research was done to determine the best design for a ﬂag. Considerations as to its size for the ability to attach to a ﬂoat, bright colors for high visibility, and a distinct design unlike any other ﬂag in the world. Lots of suggestions poured in but nothing was unique.

Finally, in the February 1958, issue of SDM Ted summarized the suggestions and identified the pros and cons of each design. He concluded with a strong recommendation that the divers flag be “a ﬂag, red in color, four units high by five units wide with a one unit white stripe running diagonally across from the top nearest the staff to the lower corner.”

The design was soon accepted by the pioneer diving community, and the now familiar red ﬂag with the white diagonal stripe began appearing. Many were homemade.

In my state of California, Stan Sheley, NAUI Instructor #180, was the very first to embrace and produce the “official” red and white flag of recreational diving. Before he opened his dive shop in San Jose, he contracted with a San Francisco flag manufacturer to produce a minimum order of 500 flags for 63 cents each. Sheley opened his shop and placed the flags on display, expecting the divers of our state to rush in and purchase them. Not so! Only three flags were sold the first year! Next year only a few more were sold.

Bob Mitchell, the founder of the aftermarket dive-product company Aqua Craft, frequently called on Sheley to sell his wares. He noticed there were a number of unopened boxes of divers flags. After a number of visits, Mitchell agreed to purchase the remaining inventory at the same price of 63 cents. Aqua Craft began selling the flags up and down the state, and California was introduced to the divers flag.

Manufacturers around the country began producing the divers flag, and it wasn’t long before the red and white flag began appearing on diving equipment, boats, jackets, and automobile windshields within the ﬂedgling diving community.

In 1962, the flag was only a few years old when the first accident involving a boat and a diver displaying the dive flag occurred in California — at Long Point, Catalina Island. While resting on his float, the diver was struck by a boat and seriously injured. I was summoned as an “expert witness” for the prosecution, and the prosecution prevailed. Under then-existing maritime law, responsibility is established by percentages. The victim was declared 5 percent negligent for being in the water, and the boat operator was 95 percent negligent for not recognizing a diver displaying the flag and running over him. Until that time the flag had been publicized among divers and was familiar with the diving public but only slightly familiar to boaters via posters placed in marinas and in launch areas.

Thus was created and popularized the “divers flag,” the uniting symbol of our sport, the only sport that has its own uniquely recognized ﬂag! The red and white flag has not been made an official flag in the U.S. or anywhere in the world but rather as a “recognized flag of recreational diving activity.” 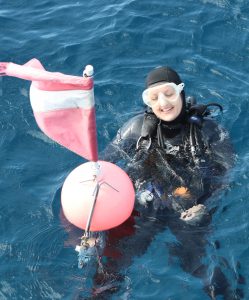 Many states recognize the red and white ﬂag as denoting diving activities taking place and have enacted laws and regulations regarding its use, who must display the flag and where and how, and what reasonable actions boat operators must take, but these vary greatly from state to state and sometimes even for different waterways within one state. Regulations even vary even as to the required size of the flag. Given the wide variance, divers traveling to another state should familiarize themselves with the particular regulations governing the divers flag.

Like Coca Cola or McDonald’s, the red and white divers flag is a pure American contribution to the underwater world. Internationally and on federally controlled waters, the blue and white alfa flag prevails as the required mark of diving operations.

The red-and-white is our unique and special flag. Display it with pride, and display it often — on your vehicle window, on your dive equipment, and flying prominently on your boat when you are diving.

Interview with a Mermaid – Lila Jones