The “Boiling Springs” of Lake Beinette 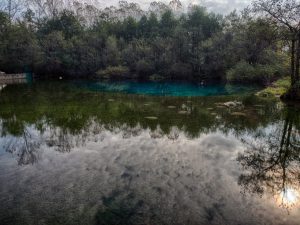 It was while on our dive at the high-altitude lake of Cima d’Asta that my friend Claudio Turco and I decided to dive Lake Beinette. Claudio had grown up in the Cuneo province in northwestern Italy, and during our overnight at Cima d’Asta, he told me tales of the lake, the fantastic purity of its waters, and its marvelous underwater springs. How could I help but be intrigued and think how interesting it would be to those springs.

Later, on our way down to the valley after our diving, we made plans to explore this lake with its “boiling springs.” Claudio said he would take responsibility to contact the mayor of Beinette for permissions. (When he did, the mayor even agreed to a short interview on local attractions, including of course, the lake.) 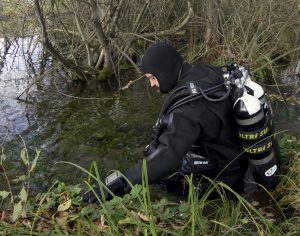 Lake Beinette is in the Italian Piedmont region and takes its name from the nearby village. It is only 9 kilometers (5 1/2 miles) from the provincial capital of Cuneo. The lake lies in a natural area surrounded by patches of old lowland forest that preserve some endangered tree species such as the black alder. From time immemorial Lake Beinette has been remarkable for its constant flow of water throughout the year and has been the primary source of water supplying the surrounding plain.

The water in the spring-fed lake has its origins upstream, mostly in losses from the riverbeds of the Gesso and Vermenagna rivers in the stretch between the towns of Roccavione and Cuneo. 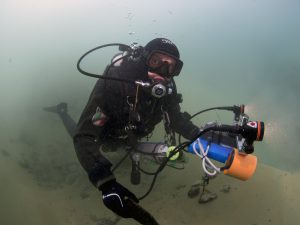 The losses create an underground flow of water that, due to the subsoil strata, is present in an extended area between the municipalities of Beinette and Chiusa Pesio. The flow reaches the surface as springs. The most important springs arise just south of the town in a slight depression that forms Lake Beinette.

Lake Beinette is known not only for its unique underwater springs but also for their massive flow of water forming the lake, which ranges from a minimum of about 1600 liters (57 cubic feet) per second in winter to up to 2,400 liters (85 cubic feet) per second in the spring. It is one of the largest springs in Europe. The water temperature is about 10 degrees Celsius (50 degrees Fahrenheit) 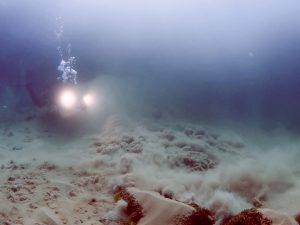 The springs have two main openings, each about 6 meters (20 feet) beneath the surface of the extremely transparent water, and the pressure of the springs’ flow is able to lift the granular sand in a “sand fountain” up to 40-50 centimeters (16-20 inches) above the bottom. Many smaller springs are also present.

The outflow from Lake Beinette has three channels, whose waters are used for irrigation, mainly for fish farming, and industrial purposes.

The most famous industrial use of the water was for the Beinette paper factory, which employed many people until the 1960s. The absolute clarity and purity of the resurgent waters allowed it to produce, among other products, a white parchment paper that other mills could not achieve. 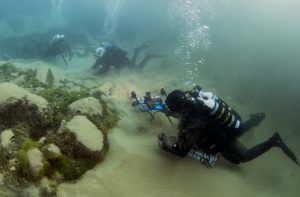 There are other springs nearby that are associated with the underground stream that leads to the lake, but they have much lower flow rates.

On the day of our dive, our group of divers met on the main road from Cuneo to Chiusa Pesio. Mayor Lorenzo Busciglio of Beinette came with us to show us around the lake and tell of its history. As we approached our dive site, the crystal-clear body of water appeared almost magically in the middle of a green meadow surrounded by trees.

After being introduced to the lake by Claudio and Mayor Busciglio, we changed quickly next to the stretch of water bounded by locks designed 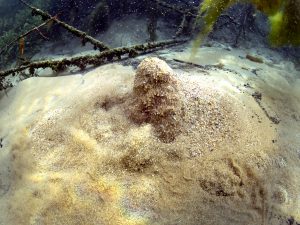 to channel the runoff to the downstream users. We set our lights on our cameras, assembled our gear, and mounted our regulators on the cylinders.

As we were readying, Claudio impressed us with consummate oratory, informing us that you can even put your arms all the way into the bubbling jets of water and sand without fear of being sucked in or falling endlessly down the hole like Alice in Wonderland.

Our entry from the shore was not exactly the easiest since the land at the shore is rendered soft and muddy by the reservoir. So we brought out a big construction awl, fixed it into the ground, and secured a rope to it that would help us pull out at the end of the dive. 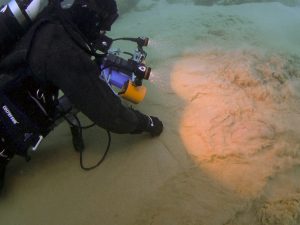 We entered the water and swam over the bottom. The visual impact of the underwater springs and the whole general scene was remarkable: The bottom seemed to rise up of itself and bubble like a pot of fiercely boiling water. From folds between rocks and the substrate, additional billows of sand gushed like some sort of submarine geyser. We moved gingerly closer and tried to understand before touching. Then Claudio’s suggestive tales of his original dive and our natural curiosity took over, and we started playing with the springs in the beautifully clear water and began filming to document them.

The lights of our cameras illuminating the scene brought out the textures of the swirling sand as we filmed. The water pressure coming out of the 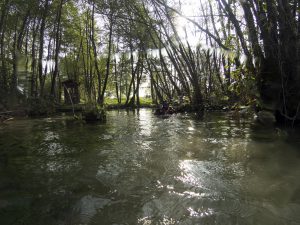 bottom and passing through the sand gave the effect of a continuous boiling, while just out of range of the flow, the sand settled and the water was totally fresh and clear, letting us enjoy the unique show!

But no dive lasts forever, and finally we surfaced, exited, and packed up our equipment — taking only pictures and memories, leaving only bubbles and flowing sand.

You can see boiling springs of Lake Beinette along with Pierpaolo’s interview of Claudio Turco and Beinette Mayor Lorenzo Busciglio (in Italian) at https://www.youtube.com/watch?v=xB3WtQjOUug. The dive begins at 3:10.