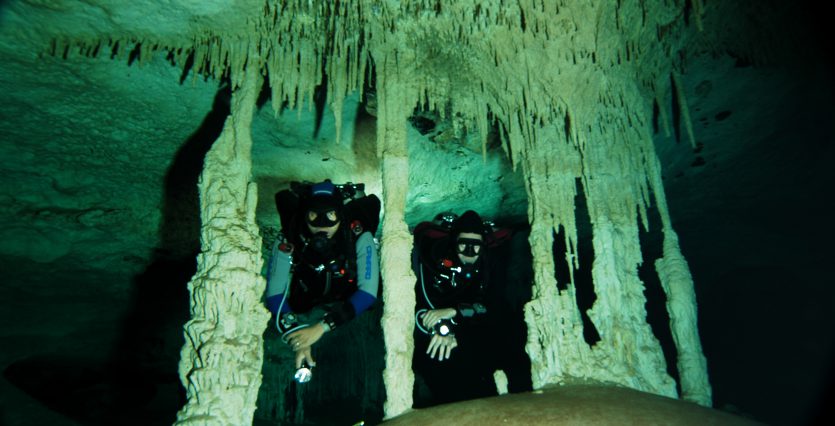 Tech Diving Q & A and Glossary of Terms: Part 1

Technical and research diving encompasses a wide spectrum of related disciplines. The scope is immense, so any treatise on tech diving is limited in scope. With that caveat, a short glossary of terms and deﬁnitions is ﬁrst given with special care to linkage to the queries.  This is the first post in a 4-part series with important information on Technical Diving, from a glossary of terms to some frequently asked questions.

Both standard (SI) and U.S. (or Imperial) units are employed in diving science. By convention, by usage, or for ease, nonstandard units are also useful. For instance, pressure and depth are both measured in feet-of-sea-water (fsw) and meters-of-sea-water (msw) with 1 atm = 33 fsw = 10 msw to good approximation.

Many acronyms, initialisms, and terms are standard in tech diving, and the following list of the more common links to the queries and explanations following:

bubble broadening: noted laboratory eﬀect that small bubbles increase and large bubbles decrease in number in liquid and solid systems due to concentration gradients that drive material from smaller bubbles to larger bubbles over time spans of hours to days.

CCR: closed-circuit rebreather, a special rebreather system that allows the diver to ﬁx the oxygen partial pressure in the breathing loop (called setpoint).

decompression stop: necessary pause in a diver ascent strategy to eliminate dissolved gas and/or bubbles safely and model based with stops usually made in 10 fsw increments.

deep stop: decompression stop made in the deep zone to control bubble growth.

diluent: any mixed gas combination used with pure oxygen in the breathing loop of rebreathers. 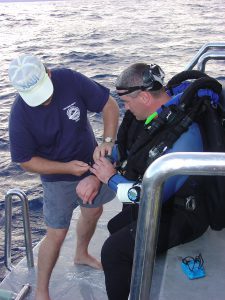 and measures change in frequency.

DSAT: Diving Safety and Technology; the research arm of PADI.

GM: dissolved gas model dividing the body into tissue compartments with arbitrary half times for uptake and elimination of inert gases with tissue tensions constrained by limit points.

HPNS: high pressure nervous syndrome, a malady associated with deep and decompression diving on mixed gases in and beyond the 400 fsw zone.

hydrox: breathing gas mixture of hydrogen and oxygen with explosive caveats and concerns.

mirroring: the gas switching strategy on OC ascents of reducing the helium fraction and increasing the oxygen fraction in the same amount thereby keeping nitrogen constant.

MPP: massively parallel processor, a supercomputer with thousands of independent minicomputers all hooked together and sharing information.

NEST: Nuclear Emergency Strategy Team, a dedicated group of scientists and engineers engaged in the discovery, assessment, disablement and removal of hostile nuclear devices and WMDs.

OC: open circuit, underwater breathing system using gases from a cylinder that are exhausted upon exhalation. 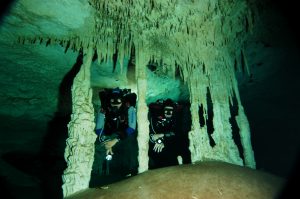 Ostwald ripening; large bubble growth at the expense of small bubbles in liquid and solid systems.

RP: reverse proﬁle, a dive made deeper than the previous dive.

saturation diving: long and deep exposures at depth wherein all tissue and blood are equilibrated at ambient pressures so that return to the surface requires extensive decompression time.

SCR: semi-closed-circuit rebreather, a rebreather similar to a CCR but using only one canister of breathing gas instead of oxygen and diluent separately.

shallow stop: decompression stop made in the shallow zone to eliminate dissolved gas. 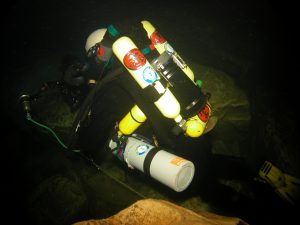 Square-root law: rough constancy of the product of depth and square root of nonstop time limits.

USN algorithm: an American dissolved gas staging model developed by Workman of the US Navy.

VPM algorithm: an American bubble staging model based on gels by Yount.

Click here for part two, part three and part four of the series.