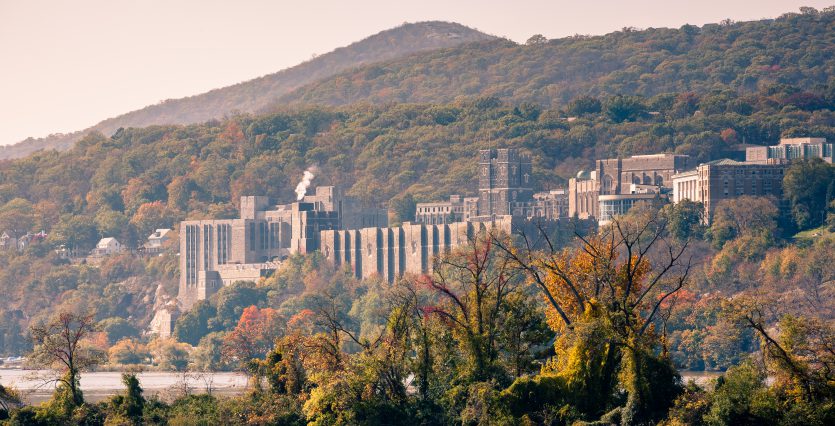 Ninety-seven kilometers (60 miles) due north of New York City, on a hill overlooking the Hudson River, sits one of the most exclusive educational institutions anywhere in the world. Some jokingly refer to it as “Harvard on the Hudson,” but in many ways, it is even harder to get into and even more difficult to graduate from. It’s an extremely competitive environment where attendees compete not only academically, but also in athletics, which are required. Even the scuba diving class has an aspect of competition to it. That’s right — in a sport that has moved away from a heavy-handed military training style, there is still a place that uses military-style training techniques. That’s because it is a military academy. West Point’s mission is to produce the nation’s future military leaders and imbue them with values rooted deep in duty and honor.

The most popular phys ed class at West Point? You guessed it — scuba diving. And as you can imagine, it’s a highly regimented program. It runs four or five times a year, and each session consists of 19 lessons. Each lesson is 45 minutes long and is conducted in either the pool or classroom setting. At the end of the 19 lessons, the cadets receive a universal referral form and a list of recommended NAUI Instructors through whom they can finish their certification when on school break. In total, the program trains about 150 cadets in the NAUI Scuba Diver course. The program is thriving and has four instructors and four assistant instructors. The students typically return from their certification dives with letters from their certifying instructors praising how well prepared (and polite) they were. The man in charge of shaping up these new diving recruits is retired colonel Bart “Woody” Woodworth (NAUI 30916).

Woodworth serves as the Department of Physical Education’s Director of Operations. He grew up in White Plains, New York, about 65 kilometers (40 miles) from West Point. His dad was a Marine who fought in the battle of Guadalcanal in World War II. After his service, his dad went on to become a high school physical education teacher in White Plains. Woodworth describes his mom as the sergeant major of the family, which included four boys and two girls. They had a house on New Hampshire’s Lake Gregg where they spent their summers, and this is where Woodworth’s dad taught the children how to scuba dive. The siblings spent hours out on the water, taking turns snorkeling above while others wore the scuba gear below. In fact, they spent so much time diving in the lake that Woodworth’s dad was accused of “using the scuba tanks as babysitters.”

Three out of four of the Woodworth brothers would go on to careers in the military, including Woodworth, who applied to West Point in 1978. Despite having the required congressional nomination in hand, he didn’t get in, so he began attending Cortland State and enlisted in the Army National Guard Reserve so he could get a degree and start his service at the same time. He reapplied to West Point and was again turned down. After Cortland State, he was commissioned as a second lieutenant. He spent five years with the 7th Infantry Division (Light) in Monterey, California, where he was officially certified as a NAUI diver. He did a lot of diving while stationed there. In 1992, he was assigned a junior military faculty position at West Point teaching physical education classes, and when a position for permanent assistant wrestling coach opened up in 1994, he entered the reserves so he could take that permanent position as a civilian instructor. He’s been there ever since.

When he arrived at West Point in 1992, he also became involved in teaching the scuba classes. The director of the program at the time, Hank Veix (NAUI 8227), took him under his wing and started training him to become a NAUI Instructor. When Woodworth first started teaching scuba at West Point, the academy offered the full certification course, including open-water certification dives. But the scuba program had found over the years that this limited the number of cadets exposed to scuba. So they switched to teaching just the pool and academics to be able to expose more students to the training. When asked “Why NAUI?” for scuba training, Woodworth responds, “Our department motto is ‘Set the Standard, Maintain the Standard.’ NAUI’s belief in safety through education fits best with this concept.”

West Point strongly supports the scuba program because it fits well with what the school does. Everything in the Army is a system. “It’s a system of systems, and you have to have teamwork and trust in those systems. That’s what scuba is all about,” says Woodworth. “Even though we teach scuba as a recreational sport, we weave in military development principles.” One of those principles is “never quit and never accept defeat.” In the scuba class, students compete for their grades. During the course, they have six different skill assessments on which they’re graded. It may be difficult to understand for outsiders, but one has to remember that top placement in their class affords the students their choice of station after graduation, so all the cadets are competing against one another all the time. At the same time, they are a team of teams, and as much as they each want to win individually, they still have to remember that in order to be successful, they have to “pull their competition up with them.”

While it would be nice to be at the top of the merit list and have your choice of post afterward, not all the cadets can be there. However, the scuba program helps influence what some of West Point’s cadets will choose to do both during and after their time at the school. In the upper-level scuba courses, students are exposed to a couple of different Army paths that involve diving. You might ask why the Army has divers, but in fact it has two different kinds: engineer divers and combat divers.

Those interested in engineer diving can attend the U.S. Army Engineer Dive School, where they can learn explosives, demolition, mine clearing and perform repair work. Students there use both hard-hat and scuba in their training. One of West Point’s scuba graduates, Major Tim Mitroka (NAUI 58164), went on to become the Company Commander of the engineering dive school.

The other branch of the Army that involves diving is the Special Forces. The Army Special Forces Underwater Operations School, often compared to the perhaps better-known Navy SEALs, is in Key West, Florida. At this grueling school, students train in combat operations with both scuba and rebreathers. West Point sends about 12 cadets each year to this specialized program.

There is another way cadets can go diving in the Florida Keys without enrolling in one of the military’s toughest schools — they can take the scuba summer class, which takes a group of cadets and instructors to Key Largo after completing pool and classroom training back in New York. While in the Keys, students do approximately 16 dives and earn Scuba Diver, Advanced Scuba Diver, Nitrox and Environmental Diver ratings.

While that Key West trip makes it sound like the kind of program we’d all like to enroll in, don’t let it fool you. “West Point is not for everyone,” Woodworth says. “There are easier places to get an education. If you don’t really want to go here, then you’re not going to be successful.” It is truly one of the most academically challenging and competitive environments a student could enroll in. It takes a special kind of person, and Woodworth not only understands that fact but lives for it. “It’s an absolute privilege being able to teach and work here,” he says. “West Point is filled with unbelievable kids and dedicated professionals. I feel blessed to be able to get up and come to work here every day. I get paid to work out with the greatest kids in the country, and the bonus is that I get to teach them scuba.”

While Woodworth remains a civilian instructor at West Point, he retired from the reserves after 33 years of service in 2012. During his service, he was deployed in Operation Just Cause in Panama and did two tours of duty in Iraq. Woody, thank you for your service to our country.