Last week, I received a request that truly inspired me, and I felt compelled to share this inspiration with all of our NAUI members.

Ace has internships already in the works and plans to become a Master Diver at the age of 16 in Mossel Bay, South Africa and Dive Master by age 18. Below are photos of Ace’s certifications, as well as his social media links.

Please take the time to read the amazing journey of this 15-year-old on his path to NAUI excellence.

I am reaching regarding my son Ace who is an aspiring Marine Biologist, a NAUI advanced certified diver (33F9D42), and he loves it!

We live in the desert of Arizona, but he’s completed a total of 41 dives, 19 of which were in the British Virgin Islands. He lived on a sailboat for three weeks and studied the marine tropical ecology this past summer. Also, he has the following certifications – rescue, night and underwater naturalist. Plus, he enjoys free diving.

Recently, he was accepted into two internships: first, the Northern Aegean Dolphin Program in Greece in June 2022, and second, Great White Shark Research in South Africa in June of 2023. He has wanted to be a marine biologist since he was 6 years old, which has led us to this journey around the world. But since he’s only 15 years old and a freshman in high school, he does not qualify for any scholarships and/or grants. He’s accomplished & dedicated yet very humble & soft spoken.

With all the said, would NAUI kindly consider sponsoring Ace for his internships? Any amount would be greatly appreciated because each internship will cost us a minimum of $3000 for his airfare and internship. In return and with your permission, I would tag NAUI on his social media posts.

Attached are his resume, and two letters of recommendation for your consideration. I may also provide receipts upon request.

Thank you again for your consideration, 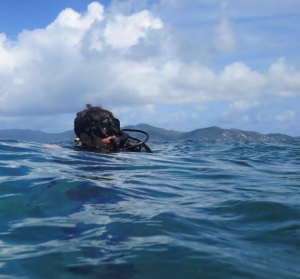 At 2 years old, Ace swam with dolphins in Mexico. At 6, he snorkeled with sea turtles & dolphins in Hawaii. At 10, he helmet-dived in an aquarium full of stingrays, nurse sharks, and Indo-Pacific fish in Arizona. At 11, he dived & played with jellyfish & saw at nurse shark in the Gulf of Mexico.

At 13, he became NAUI Scuba Certified in Open Water, and Nitrox in Florida. And at 14, he obtained his certifications in Advanced Open Water, Rescue, Night Diver and Underwater Naturalist in the British Virgin Islands (BVI)!

Although he lives in the Sonoran Desert of Arizona, he’s completed a total of 41 dives, 19 of which were in the BVI. There he lived on a sailboat for three weeks, studied the marine tropical ecology, and acquired life & leadership skills in June & July 2021. His other dives include: 2 Atlantic, 8 Gulf of Mexico, 3 Pacific, 4 freshwater, and 4 freshwater caves since becoming certified in July 2020. Plus, he enjoys free diving, and has always been fearless of the ocean. 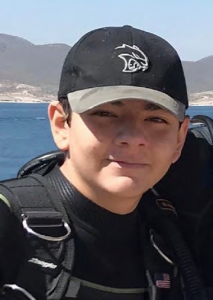 Recently, Ace was accepted into two internships: first, the Northern Aegean Dolphin Program in Alonissos, Greece in June 2022, and second, Great White Shark Research in Mossel Bay, South Africa in June of 2023. He has wanted to be a marine biologist since he was 6 years old, which has led him on this journey around the world. Since he’s only 15 years old and a freshman in high school, he does not qualify for any scholarships or grants and is looking for sponsorships. In return, he would post and tag sponsors on his social media account.

He’s accomplished & dedicated yet very humble & soft spoken. But with some encouragement, he gladly conducted a presentation on marine biology and scuba diving to a class of 50 – 5th graders in South Phoenix this past November. They were surprised when he said that he’s been 10 feet away from a shark! When he’s not diving, he’s training for his black belt in Kenpo Karate, perfecting his Spanish, or studying the evolution of ancient cephalopod (squids & octopi). His goal is to attend the University of Tampa to become a professional marine biologist while seeking to discover new species & researching sharks. “Sharks are misunderstood” – Ace.