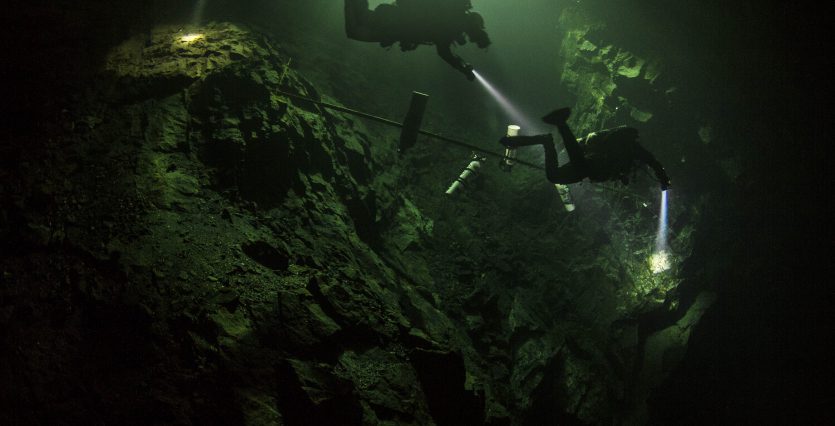 Mine Diving in Sweden

Geological karst features, necessary for the formation of water-filled caves, are scarce in Sweden, and no suitable caves exist for cave-diving training. However, with literally thousands of water-filled mines, hundreds of which are accessible, it would perhaps be apt to call central Sweden “mine country,” akin to Florida’s famous “cave country.”

Stable bedrock and a millennia-old tradition of mining have left sites scattered around the landscape in large areas of north and central Sweden. Climate and groundwater levels ensure the mines start to fill up the moment the pumps stop running, and within a decade or two, the water levels stabilize. In recent years, interest in mine diving has exploded in Sweden due to the increasing popularity of cave diving internationally, as well as the seasonal requirements in a country with arctic winters. Until recently, however, access to local training has been limited.

In the spring of 2016, I had the opportunity to visit Lahti, Finland, to attend a NAUI Technical Instructor Workshop with NAUI Finland Representative and Technical Course Director Pasi Laine (NAUI 42324). Laine and his colleagues have developed a series of mine diver courses, and I aimed to earn a Mine Diver Instructor designation to be able to teach mine diving in Sweden. After a hard week of theory, pool, open-water, and overhead environment training, I was awarded a passing grade and allowed to take the teachings back home. In this article, I give you a short account of mine diving in Sweden, as well as a report of the first course I conducted.

Cave-diving training is often looked upon as the most demanding recreational scuba training available, with a high emphasis on in-water skills, psychology, and incremental training levels. Many agencies, including NAUI, provide comprehensive cave-diving training programs, but few extend to mine diving. Arguably, caves present the most similar conditions to those a diver will encounter in a mine. However, the man-made nature of mines poses unique challenges for divers, among them the near-freezing water temperatures in places like Sweden, entanglement and collapse hazards, and dangerous materials that may be leftover from the excavation process.

In contrast to caves, mines are purpose-built, and restricted spaces are far less common. A tunnel built for transporting men and ore provides plenty of room in which to swim and maneuver. Mines are also quite logical and predictable, which makes navigation easier even if the system itself is complex. Swedish mines range in size from simple quarries to vast and complex sites spanning several kilometers, often reaching depths in the 250- to 500-meter (800- to 1,600-foot) range. The relatively well-known Tuna-Hästberg mine, for instance, is approximately 1,200 meters (4,000 feet) wide and nearly 600 meters (2,000 feet) deep, yet it is far from the largest, and we are currently exploring sites stretching more than 5,000 meters (16,000 feet) across. Unlike caves, mines are almost always layered with each level containing possibly thousands of meters of tunnels, offering a wealth of opportunity for exploration. Access to the sites in Sweden is uncomplicated, largely due to a law that literally translates as “all-men’s right,” a tradition of accessibility to nature that prevents landowners from limiting access for recreational activities.

Although typically straight tunnels, rails, and various installations help divers with navigation, they pose hazards that cave divers may not be familiar with. Caves are formed over thousands of years, while mines are built in what is geologically a blink of an eye. Tunnels are carved or blasted, leaving unstable areas with a high risk of collapse. During the mine’s operations, these areas are supported by structures, but as the mines flood, these structures weaken. A diver’s bubbles or fin kicks can disturb the fine balance. It is, therefore, crucial to understand various types of mining and support techniques to evaluate the safety of passages.

Finally, the mining process itself leaves behind infrastructure installations and chemicals that are completely foreign in naturally formed environments. Entanglement hazards due to cables are easy to understand, but it requires specialized training to appreciate the impact of hazardous chemicals or explosives that might have been left in the mine. Fortunately, water tends to stabilize things somewhat, and to my knowledge, there have been only minor incidents from these hazards in the Swedish mine diving community.

While surface temperatures can be pleasant in the summer, most underground mines maintain a cool year-round climate. It is not uncommon for water temperatures to linger around zero to 6 degrees Celsius (32 to 42 degrees Fahrenheit), requiring drysuits, heavy undergarments, thick, clumsy gloves and, in many cases, active heating. Today many popular sites in Sweden offer decompression habitats; however, often divers need to carry out relatively long decompression in the water. Visibility also varies from site to site and is often good, but the lack of flow means that once disturbed, sediments can linger suspended for prolonged periods.

Despite having extensive training and experience in cave diving, I was glad to be one of the first divers to go through the new NAUI Mine Diver program. Once I completed my mine-diving instructor training, it was time for the first NAUI Mine Diver course in Sweden. The course was held in September and October with two highly motivated students, and it totaled six days of training spread over two weeks. The students came well prepared, with decompression knowledge and ratings equivalent to NAUI Intro to Tech.

Like its cave equivalent, the NAUI Mine Diver I course kicks off with diver evaluations, land drills, and two skill-development sessions. We spent a beautiful autumn day at the local quarry focusing on gas sharing, problem-solving, line drills and managing zero-visibility situations. Both students excelled, and for the weekend we traveled to the Tuna-Hästberg mine, near the city of Borlänge in central Sweden. The next two days were spent repeating the previously trained skills, progressively making the exercises more complex and venturing farther into the mine.

The cold water and extensive training call for proper breaks, and the time in between dives were spent on theory sessions from the Mine Diver curriculum. We covered aspects of navigation, line laying, dive planning, psychology and accident analysis. Luckily, the Tuna-Hästberg mine provides heated rooms to escape the chilly conditions and offers a comfortable environment for teaching. For those readers who think that mine diving would be easy for anyone with previous cave training, I suggest trying lost-line drills in drysuits and freezing water while wearing thick gloves that limit manual dexterity. It is a humbling experience, and I raise my hat to my students for performing so well.

Having completed the initial parts of the training, we took a break to recuperate and met again two weeks later for the final three days of diving. Again returning to Tuna-Hästberg, we proceeded with scenario-based exercises, slowly raising the difficulty level to zero-visibility, gas-sharing exits. To complete the training, a local expert conducted a guided tour of the dry levels, pointing out hazardous areas and technical features of the mine. Finally, we closed with a written exam, which both students completed without issue.

All in all, we spent around 800 minutes in 4 degrees Celsius (39 degrees Fahrenheit) water over 10 dives, completing a challenging but rewarding course. The students exhibited great skill and excellent attitudes. Another few courses are planned for 2017 and will add more NAUI mine divers to our community. If I have managed to spark your interest in mine diving or in Swedish mine diving possibilities, do not hesitate to contact me at jonisn99@gmail.com.

Johan Isaksson started scuba diving in 1995 in the north of Sweden at the age of 15. After graduating from medical school in 2005, he moved south and took up technical diving, completing NAUI Trimix and Wreck Penetration courses in 2008. Cave-diving training followed in 2009 with classes in Mexico, and in 2011, he joined the ranks of NAUI Instructors. He currently works as a specialist in pulmonology and internal medicine at Gävle Hospital in Gävleborg County and freelances as a NAUI Technical Instructor. His main interests in diving are mines and wreck exploration in the Baltic Sea utilizing closed-circuit technology.