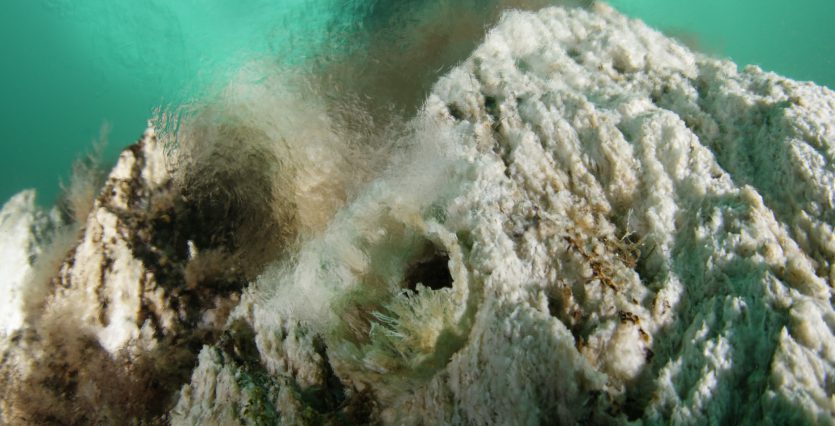 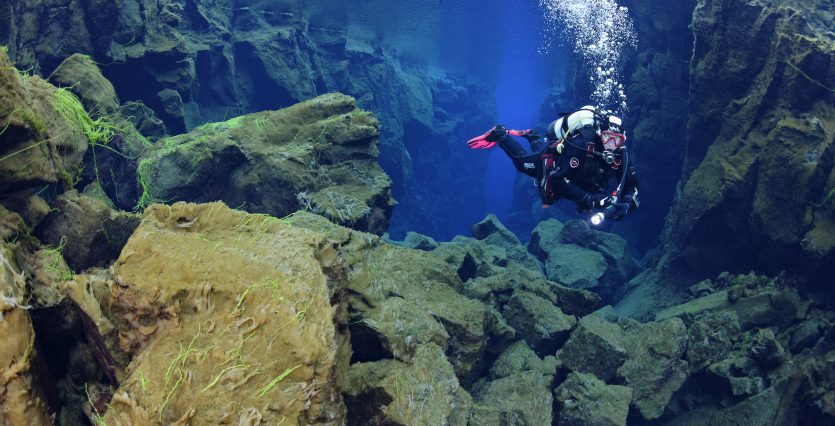 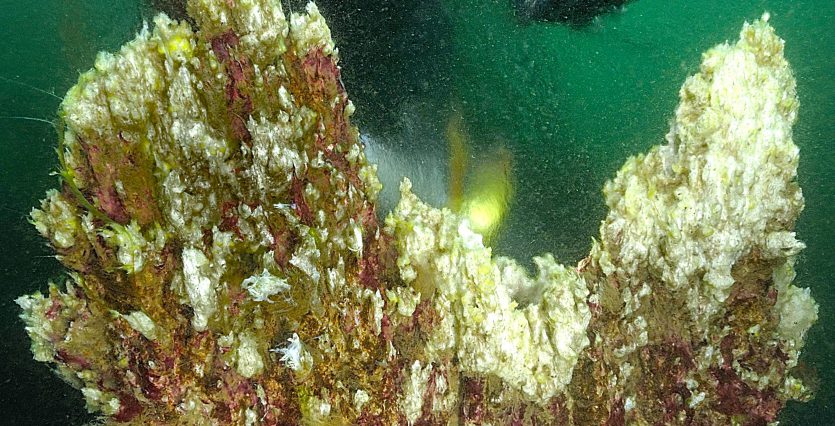 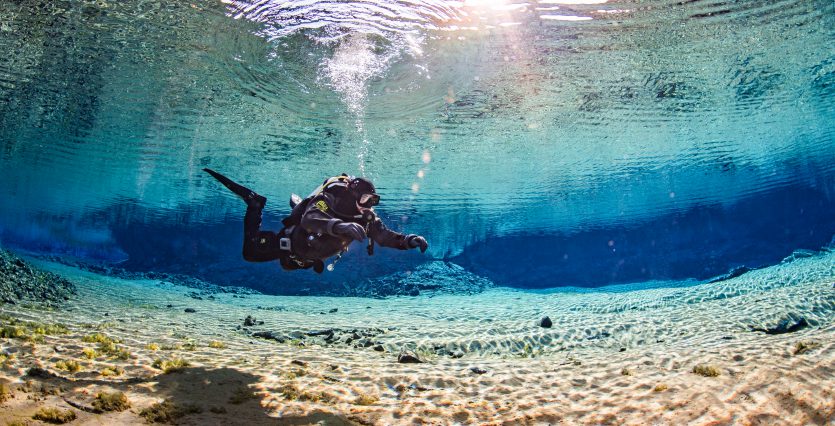 Straddling the Mid-Atlantic Ridge, just south of the Arctic Circle, sits one of planet Earth’s most unique islands where active volcanoes roar, massive glaciers slowly pour into scenic fjords and more than 80 percent of its landmass is uninhabited. The mountains and other-worldly landscapes are so breathtaking they’ve served as backdrops for movies such as Star Wars: Rogue One, Thor: The Dark World, and Oblivion amongst others. While filming in Iceland, Oblivion star Tom Cruise took some time to enjoy one of the island nation’s most astounding sights — and it happened to be underwater.

Imagine yourself hovering in what seems like mid-air. You’re flanked on both sides by two massive rough-hewn vertical stone faces. It looks like some ancient civilization of giants had carved the 10-meter-wide (33-foot-wide) fissure you find yourself in. While it seems like you’re floating in air, You’re actually suspended in water so clear it creates the illusion of air. The surface of the water shimmers just 9 meters (33 feet) above you, and the floor of the chasm is another 9 meters (33 feet) below. Sharp rays of sunlight cut through the narrow space at dramatic angles from the opening above and dapple bright spots of light on strange, green, spaghetti-like patches that grow on the rocks around you. Your drysuit protects you from the 3-degree Celsius (37-degree Fahrentheit) fluid enveloping you, and almost unnoticed, a gentle current slowly pushes you towards your final destination — a shallow expanse of this crystal clear water — Lake Thingvellir. Sound like a scene from a movie? You don’t have to travel to outer space or be a famous movie star to experience it yourself. It’s actually a description of a typical mid-summer dive at Silfra, Iceland’s most popular dive site.

Just an hour’s drive from the capital city of Reykjavik, you’ll find the Thingvellir National Park where there’s a fissure that separates the North American and Eurasian continental plates. It’s here at Silfra that divers and snorkelers enjoy a thrill of a lifetime diving between the continents. The fresh water that gently flows through the impressive crevice is crystal-clear, pure glacial water that takes around 80 years to filter through the volcanic rock before it sees daylight. It surfaces in the crevice where it boasts almost unheard of 100-meter (110 yard) visibility, and thanks to the long underground journey, the temperature of the water stays at a constant 2 to 4 degrees Celsius (35 to 39 degrees Fahrenheit) year round, making this a drysuit dive no matter the time of year.

“It’s my favorite dive of all,” says Zvjezdan “Jammi” Jovisic. Jammi is the operations manager and an instructor at Dive.IS – The Sport Diving School of Iceland. Relatively new to diving, this transplanted Bosnian started diving in 2009, began working at a dive center in 2011, and became an instructor in 2013. Like many of the diverse staff of about 50 people at Dive.IS, Jammi has tried diving elsewhere, but simply loves the diving in Iceland — enough to make it his home and work. “No matter where our instructors travel to and work, they always seem to come back here. Not just for the diving, but it’s a great place to work!” 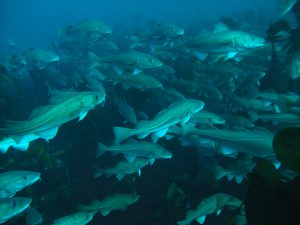 Despite the otherwise cold water and long, cold winters, there’s plenty of diving to be done in Iceland. Silfra, of course, is their most popular dive attraction. “Since the water conditions are pretty much constant year-round,” says Jammi, “we run Silfra tours continuously. The limiting factor in the winter is not the temperature. That remains constant. It’s the lack of daylight.” In wintertime, Reykjavik only has sunlight for six hours per day between 10 a.m. and 4 p.m., leaving only enough time for two tours. “Despite the snow on the ground around the dive site — many people think that’s a cool part of the experience — we could fill even more wintertime tours if not for the lack of light.”

While they might lack daylight in the winter, there’s certainly no shortage of interesting and varied dive sites to explore around Iceland. The summer months are most popular to visit with the long days and temperate air temperatures, but the diving remains cold year-round in both fresh and salt water. About 375 kilometers (233 miles) wide and 224 kilometers (139 miles) from north to south, Iceland is the 18th largest island in the world, but there is no road that cuts directly across it. There is, however, a main road that circumnavigates the island country that covers a distance of about 1,330 kilometers (830 miles) and would take about 12 to 13 hours to drive if you didn’t stop; but how could you resist all of those other-worldly photo opportunities along the way? Or the dive sites you could explore?

Reykjavik sits in the southwestern corner of Iceland. Just 30 minutes east of the city is Lake Thingvellir where you’ll not only find the aforementioned Silfra dive site, but also a lesser known, more mysterious version of Silfra, called Davíðsgjá, roughly translated: David’s Crack (no snickering). “I prefer Davíðsgjá,” says Jammi. “At Silfra there’s always someone there, but at Davíðsgjá you can dive and not encounter any other divers.” It’s a deeper, darker version of Silfra with otherwise similar conditions. The only catch is a 300-meter (330-yard) swim to get to the fissure, but along the way it’s common to encounter arctic char and other fish in the shallows. “I prefer this site for training dives,” says Jammi.

For a taste of saltwater diving near Reykjavik, try diving Garður where you can explore extensive kelp gardens that serve as home to many cold-water species such as wolffish and cod, not to mention the selection of nudibranchs and other smaller critters you can find here.

While there are nice ocean dives near Reykjavik, one of the highlights of ocean diving in Iceland is the wreck of El Grillo. This 150-meter-long (490-foot-long) British oil tanker was sunk by German fighters during World War II. For decades, the ship slowly leaked oil, but in 2002, most of that oil was removed. Regardless of the cleanup, they still recommend not penetrating the cargo area as you may come up covered in hard-to-remove oil. The maximum depth of the dive is 45 meters (148 feet), but the bridge is at 25 meters (82 feet). Due to the ship’s size and the variable visibility of about 5 to 20 meters (15 to 65 feet), there are three buoys on the wreck, which mark the bow, stern and midway point. This makes it easy to descend the line at either end of the wreck, progress forward and ascend the midway buoy. For the second dive, descend the midway buoy, complete your tour of the wreck, and ascend at the last buoy.

The El Grillo may thrill wreck divers, but there’s one saltwater experience in Iceland that to the best of mankind’s knowledge is the only one of its kind. Typically geothermal chimneys are found in the depths of the ocean, well beyond the range of divers, but not far from the main city of Akureyri is the dive site called Strýtan. Here a geothermal chimney has been spewing mineral-rich hot water into the cold ocean for over 11,000 years, forming a chimney that grows from the ocean floor at 70 meters (230 feet) and comes to within 15 meters (50 feet) of the surface. This vertical pinnacle is so narrow at the top that three divers holding hands could make a ring around it. A plume of what looks like white, blurry water continuously flows from the top of the chimney, and its vertical face is covered in marine life. Not far from the big Strýtan is a smaller chimney with a maximum depth of 25 meters (82 feet) called Little Strýtan. Most notable at this site is the density of marine life packed around the smaller chimney including resident wolffish, schools of cod, mackerel and more.

Time to Pack Your Bags

Regardless of whether you’ll be diving the freshwater or saltwater sites, diving Iceland means diving in cold water. If planning a trip, make sure to train your clients in drysuit diving and have them build some experience before getting on the plane. Operations like Dive.IS offer multi-day tour packages that can be customized and include just about everything except your bar tab. They also have a couple hundred neoprene drysuits to rent if you don’t feel like the added weight in your luggage, or your clients don’t own their own suits. A trip to Iceland is sure to be a trip you and your clients won’t soon forget. It’s like being in a sci-fi movie, but the highlight of the trip might just surprise you.

“The diving in Iceland blows people’s’ minds.” says Jammi. “But for most of the people traveling here, this is extreme diving.” The highlight after an adventure of trekking through snow to dive between the continental plates in unheard of visibility is “when I hand them a steaming cup of hot chocolate and cookies after the dive. That puts a smile on everyone’s face.” No doubt hot chocolate can serve as the cherry on top of the whole experience, but Jammi has even one more trick up his sleeve. When diving Strýtan “I like to take a thermos down with me, fill it with hot, freshwater and use that to make the hot chocolate after the dive! Although,” he adds after a brief pause, “it doesn’t taste as good… maybe it’s the magnesium.”

According to Icelandic law, scuba divers need to be 17 years old or older. This eliminates the possibility of younger divers experiencing Icelandic diving, but since all diving is done in drysuits, it may serve as a practical limitation as well. Kids 12 and up can snorkel in places like Silfra, although the main impediment is finding a drysuit that will fit a small 12 year old. Some dive operations like Dive.IS impose a minimum age of 14 for snorkelers. In addition, divers will require proof of drysuit experience. You have to be either drysuit certified, or have logged at least 10 dives in a drysuit and have the log signed by an instructor. Train your divers in drysuit use prior to embarking on your Icelandic adventure, and if they’re going without you, make sure they have this experience documented before they leave.

The Hardest Karaoke Song in The World

Want to learn how to speak Icelandic? Since most Icelanders speak English it’s not necessary to pick up Icelandic prior to arriving, but follow this link and scroll down to find a funny video introducing you to the language and beautiful scenery: www.inspiredbyiceland.com/a-o