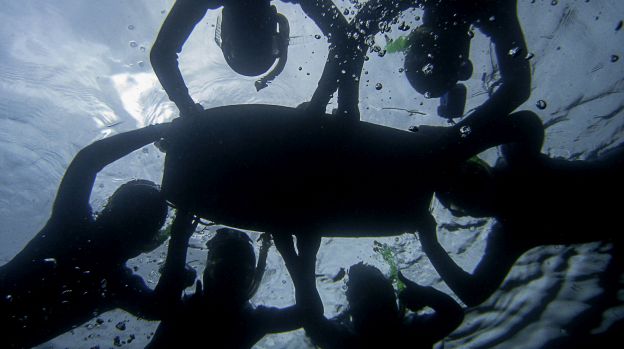 Having a new student bolt toward the surface is probably the biggest fear most instructors face. Flooding the mask and taking the mask off underwater are probably the two skills that give new divers more anxiety and make them more likely to bolt. To reduce this anxiety, most instructors usually first have students put their faces in the water and breathe through the regulator without a mask at the surface. However, this is an example where rushing and not taking our time when introducing students to scuba can often become a lost opportunity. 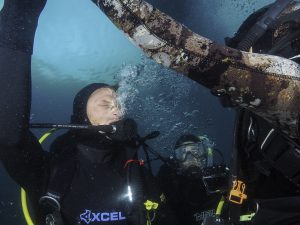 When we tell students to breathe from the regulator without the mask at the surface, many of us instruct them to count five seconds, and then they are done. Counting to five probably helps distract them and make it easier for them to complete the skill. Nevertheless, five seconds is not enough for new divers to become comfortable breathing through a regulator while feeling the water tingle their noses.

Instead of having them count to five, I prefer to tell students to take off their mask and keep breathing through the regulator until I tell them to stop. I get close to them, maybe even touching their shoulder, and try to use my most nurturing, relaxing voice to reassure them as they perform this “Hello Ocean” skill.

For safety reasons and my own peace of mind, I do not take any student underwater until I consider they are relatively comfortable breathing through the regulator without a mask with their faces in the water.

Of course, most of us do not teach individual classes where we can be one-on-one with students performing this skill. I usually have between four and eight students to oversee along with an assistant instructor. What I do is have my students all hold on to either a surface line or a float shoulder to shoulder, and all together have their face in the water breathing from the regulator without the mask.

I usually frame it as taking a nap, emphasizing that we will tell them to stop when everybody is so comfortable they are falling asleep. Instead of a couple minutes of checking that students count to five with their faces in the water, this may take more time. A student once told others she had been breathing through the regulator without the mask for three minutes. 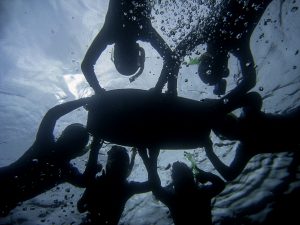 Some new divers will be more comfortable than others, but that is not an issue because those comfortable ones would be overlearning while we make sure to have the whole class act as a team, and I can still focus on making sure everybody is able to do this skill.

I have found that this “Hello Ocean” skill can be critical when introducing new divers to the underwater environment. I remember a young girl recalling in a later course her experience with this skill and saying it was like bullying. However, she continued that it got her ready for other skills, and she was confident she could handle them.

Great introductions should not be rushed. It is important to take our time and make sure students are ready before moving to the next step. A great hello goes a long way!