Helium Speech: An Astronaut Calls the President of the United States

When you take a breath from a helium balloon and speak, your voice rises humorously. 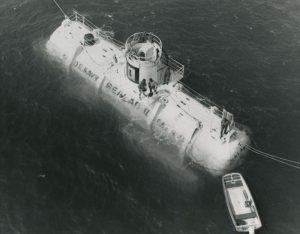 What happens when an astronaut does the equivalent and receives a phone call from the President of the United States?

In the 1960s the U.S. Navy developed the SEALAB project, a series of underwater habitat experiments to test the feasibility of saturation diving and living in confined quarters for extended periods. In 1965, SEALAB II was installed 62 meters (205 feet) down on the ocean floor off La Jolla, California, replacing SEALAB I, which had been off the coast of Bermuda.

SEALAB II was sometimes called the “Tiltin’ Hilton” because of the slope of the site. Teams of “aquanauts” lived and slept inside, dry and breathing air pressurized to that depth. The SEALAB project was under command of Dr. George Bond, Captain, U.S. Navy Medical Corps, who was affectionately called “Papa Topside.” 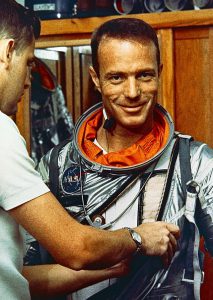 NASA astronaut Cmdr. Scott Carpenter, who had piloted the Mercury 7 orbital mission in 1962, spent a record 30 days as an aquanaut in SEALAB II. After spending that much time at that depth, special surfacing protocols were needed, involving changing the breathing mixture and slowly reducing the pressure to avoid decompression injuries from the nitrogen that had been absorbed while breathing the air at SEALAB II’s 7.2-atmosphere pressure. The ascent was done inside a special decompression chamber, breathing a mixture containing helium to help wash out the nitrogen.

Helium changes heat transfer both inside and outside your body and changes how fast sound can travel. Sound travels faster through helium than through air, causing the “Donald Duck effect.” People who inhale helium from a balloon and speak on the exhale, have a distinctive 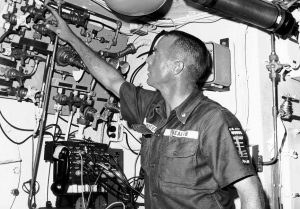 humorous voice change. The funny voice lasts only as long as helium is passing the vocal apparatus.

A recording was made of Carpenter speaking on the phone with President Lyndon Johnson for a formality of congratulations while still inside the decompression chamber breathing the helium mix. The recording of Commander Carpenter was found, restored, and made available through NPR National Public Radio in 1999. The NPR version has been taken down, but you can listen to the conversation, including the logistical problems of making a simple phone call using cutting-edge technology of the mid-1960s here:

Or as part of a PBS short SEALAB II story here:

Dr. Jolie Bookspan is a research scientist whose work has taken her to U.S. Navy labs, underwater labs, aviation cockpits, and mountaintops to test and safely extend human survival and improve performance. Dr. Bookspan was inducted into the NAUI Hall of Honor and is a Fellow of the Wilderness Medical Society. For her books on diving medicine and health for divers, hyperbaric chamber treatment, and becoming credentialed, see Dr. Bookspan’s website books page http://www.DrBookspan.com.