Gasp Our Beads Clean-Up Nets More Than 1,200 Pounds of Beads and Other Trash 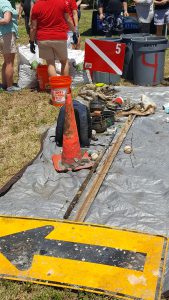 Approximately 70 volunteers dove into Tampa Bay for the third annual Gasp Our Beads clean-up project. All told, the divers gathered 1,266 pounds of beads, bottles, metal, nets, and other trash from the banks and waterways.

The clean-up was sponsored by a mini-grant from the Tampa Bay Estuary Program. Mica Neal from Next Level Dive Club partnered with NAUI Green Diver Initiative and the Center for Open Exploration (C4OE) to host the event in early June off David Islands in Tampa. 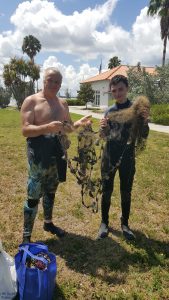 Volunteer boat captains, kayakers, ground/topside support, divers and non-divers all joined in the effort to rid the waterway, channel seawall, and trees along Davis Islands of toxic beads and debris while collecting data that can be used to help make better choices for future Gasparilla events held in Tampa.

Gasp Our Beads of Tampa Bay aims to learn about the long-term effects and distribution of festival beads on the aquatic environment and eventually to also work with the community to identify feasible environmentally friendly options. Continued research and participation could provide the potential for more far-reaching collaboration and discussion of alternatives to plastic beads that sink. Options already being tested in some areas include biodegradable beads that would be less persistent in the environment and/or floating beads that could be more easily collected.

“We are proud to call Hillsborough County home and look forward to continuing to build collaborations within our community,” said NAUI Executive Director Rick Lorimor. “As hoped, the project has inspired NAUI Green Divers and stewards from across the state to collaborate and continue this event.” 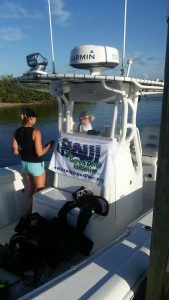 The NAUI Green Diver Initiative has been in support of the project all three years with a continued commitment to reducing the impact of plastic beads and trinkets on coastal waterways linked to Gasparilla activities, one of the largest events in the Tampa Bay region. The purpose of Gasp Our Beads is not only to clean a measured section of the channel and seawall but to quantify the distribution and abundance of beads and trinkets. This year, organizers spanned a half-mile distance along the channel with five total areas focused on bead removal – four designated for boat access and one area for seawall access.