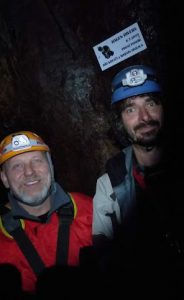 In the Czech Republic, we do not have the sea or extensive cave systems. On the other hand, we have many flooded mines. The majority of the old mines were closed long ago, and their entrances have been filled up.

Our scuba diving team, Hagen Divers, set out to locate diveable places in the northwestern part of the Ore Mountains. The very name of these mountains tells you that it is an area where mining once took place.

We succeeded in finding a collapsed area at the location of an old mine, through which we found our way to the underground. Depressions are sometimes formed by old passages and tunnels located near the surface that have slumped, and they can sometimes uncover an entrance to the system. There are times when just removing a fallen tree will reveal a mystical opening and a long forgotten labyrinth of old passages. We were able to enter through such a space into the mine. 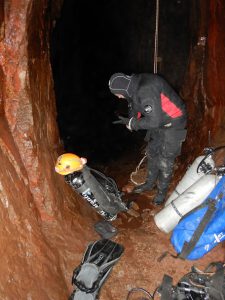 Historical sources tell us that active mining had been in the area since at least the 12th century. A big boom of mining was in the 16th to 19th centuries, mainly tin (for pewter), silver, and copper. More recently, pitchblende (uranium ore) was mined also. There are not many maps showing the mines, though perhaps they exist in archives of mining companies.

In cooperation with cavers, who sneak through any hole in the ground to find sleeping bats, we searched and managed to find a collapse that opened into an old, water-filled tin mine. The area had been walked extensively and only closed depressions found.

Unfortunately, the entrance is at an altitude of 1,000 meters (3,300 feet), which from the scuba diving point of view, makes it a pretty extreme altitude dive.

Another problem was reachability: all ancient paths have disappeared, and the majority of the surrounding area is mountain meadows. Not the beautiful fields of green grass one might expect, but rocky mountain fields: hole-spangled and covered with broken bushes and trees felled by the wind. The area is barely reachable by cross-country vehicles. 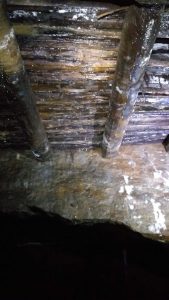 Spelunkers need to carry a backpack, rope, and climbing gear to enter caves, but for us, scuba diving equipment is much bulkier and notably heavier. To prepare ourselves for the trip down into the mine, it took several days. Our “riggers,” Martin and Josef, had to drill many holes for pitons and rig a lift system to help us lower our gear and ourselves down and then back up. We had to transport all the equipment to the edge, descend through the collapsed area, then it was a 10-meter (33-foot) drop on rope to the lower area of collapsed debris and rocks, a climb to an upper floor, a walk on rocks fallen from the ceiling to another tunnel. There we had to descend about 30 meters (100 feet) straight down to the water level.

Finally, on the July 6, 2019, we had our first real dive. A year before, we had made one short discovery dive, but it was only 20 minutes long to acquaint ourselves with what would be waiting for us.

Since 1850 when the mining ceased, the mine has flooded with water. We were the first persons in 169 years to enter the dark depths through fallen timber supports and stones.

The dive we planned was for 30 meters (100 feet) maximum depth. Mine debris spread on both sides as I attached my reel with the guideline on an old wooden beam, ascended a few meters, and swam to a tunnel on the right side. Its entrance was in 28 meters (92 feet) of water, and it was almost fully obstructed by fallen timber supports, but with an effort, it was possible to pass through. About 30 meters (100 feet) into the tunnel I realized that the floor had risen, and the depth was now 22 meters (72 feet). After another another 70 meters (230 feet); the tunnel was continuing even further, and we began the return. On the way back, I realized that we had swum to an upper floor and that there were two connected tunnels. This happens a lot in these mines, veins of ore converge or spread to all directions.

Descending to the lower tunnel, there were not any timber supports here; they were not needed where the tunnel was hewn in hard granite rock. Swimming 200 meters (650 feet) into the lower tunnel did not reveal an end. My breathing gas was diminishing, and so the dive was turned. On the way back, silt was falling that had been loosened and then released from the old

beams by our exhaled bubbles. It was like snowflakes, and it is beautiful, but for photography, it is a disaster. Martin was waiting in the decent area, and we made our ascent to the surface.

During this first exploration, we reached a depth of 30 meters (100 feet), and we inspected two small parts of two side tunnels. We suspect that the bottom of the mine may be as much asz` 150 meters (500 feet) deep, but that is only a best guess; it could be far more.

The time that we could not spend diving, we utilized for mapping the air-filled parts of the descent area. Josef and Martin took care of the measurements, and Josef created the map.

We are looking forward to our next adventures in the spring when the water levels will allow us to dive into this stunning underground.