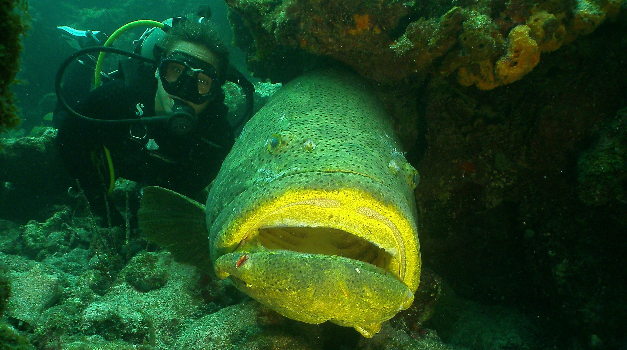 Gigantic! — the loggerhead turtle’s tail at the base is bigger around than my hands, thumb and forefingers spread wide. I’ve logged the big fella’s return to the same reefs off Ocean Ridge, Florida, over the last 26 years. 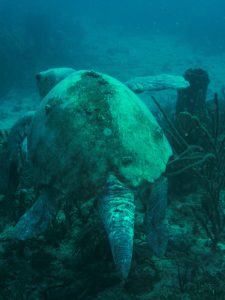 He’s easily recognized by the propeller scar on his carapace. He does not live there year-round; he comes each season to mate. Magnetic crystals in the turtle’s brain direct him back year after year to the place where he hatched out. Judging from his size and the cataracts in his aged eyes, he has been around a very long time.

Reefs from Boca Raton, Florida, north to Jupiter are fairly consistent. Running about a kilometer to a kilometer and a half (0.75-1 mile) offshore in the Atlantic, the inshore or western edge is in about 18 meters (60 feet) deep. The eastern edge is about 24 meters (80 feet) to the sand. In between, the top of the reef is about 15 meters (50 feet). Ledges along the reefs form great areas to explore, harboring all manner of marine life. Both soft corals and hard coral structures abound. Tropical reef fish of all sorts can be seen.

The northerly flowing Gulf Stream meanders in close to shore. Not only does the Gulf Stream sweep reefs clear of pollution due to canal dumping, agricultural runoffs, and human and animal waste, it brings in large ocean dwellers that seek food in shallower zones.

The Atlantic reefs in the area from Delray Beach north to Jupiter abound with sharks. Some are territorial. Nurse sharks rest in caves and niches in the coral, under ledges and sometimes on the sand. Hammerheads, bull sharks, lemon sharks, sandbar sharks, and rarely, whale sharks venture along the reefs. While nurse sharks may remain still long enough for a diver to snap off several photos, the pelagic sharks keep moving. The sharks are attracted to those who spear fish, just as goliath groupers hang around the lobster catchers. 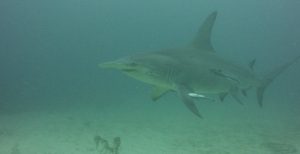 “Aren’t you afraid of sharks?” is a question asked by non-divers all the time. My answer usually explains that the shark behavior shown in exciting film clips on YouTube or television is provoked by feeding or chumming the water. While feeding marine creatures by divers in Florida’s territorial waters is illegal, beyond three miles out it is allowed. Shark feeding dives are popular although controversial. Normal shark behavior does not follow feeding-frenzy stimulated activity. It is often hard to get a good close-up photograph of a large shark underwater before it sees divers, feels vibrations from their exhaled bubbles, and swims quickly away. While pelagic sharks are not usually associated with distinct territory, many large sharks have been consistently seen at certain times of the year on specific reefs. 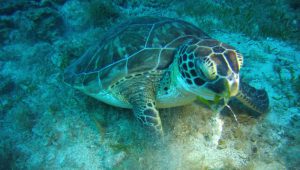 Five of the seven marine turtle species are seen offshore of Florida’s Atlantic reefs. The rarest is the Kemp’s ridley sea turtle. I have photographed this species only twice, both times off Boynton Beach. To get there the turtles must swim from their birth beaches in Tamaulipas, Mexico, around the Florida Keys, and up through the Straits of Florida. The Kemp’s ridley has been seen as far north as Cape Cod in summer. Marine turtles cannot live in cold water temperatures. So to survive the turtle must make its return trip before winter.

Loggerhead, green, hawksbill, and leatherback turtles are prevalent. The females nest on beaches all along the coast, and nest predation is a main peril of all sea turtle species. The loggerheads are also in danger from Cuban tortugueros and other Caribbean islanders that relish turtle meat. Marine turtle species are all on various endangered lists and thus protected. 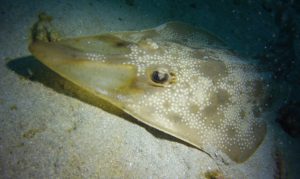 Moray eels make exciting underwater pictures. Green morays are territorial and poke out of niches in the reef, mouths opening and closing, exposing their fangs as they pump water for oxygenation. Sometimes photographers are lucky enough to get a picture of a free swimming moray as it moves across a reef looking for a meal,

Florida’s spiny lobster is a delicacy. The Florida lobster season runs from a diver-only mini-season weekend at the end of July to the regular season, which runs from August to the end of March. Divers must carry a lobster gauge to measure the carapace from eye socket to its junction with the tail to ensure it is legal size (greater than 3 inches). No egg-bearing lobsters can be taken.

Diving the Atlantic Ocean in Palm Beach County offers opportunities to explore some of the most beautiful reefs in the world.

Your invitation to join a NAUI Committee!

NAUI Head office will be closed on November 25th and 26th

Join Us for the Next NAUI Talk