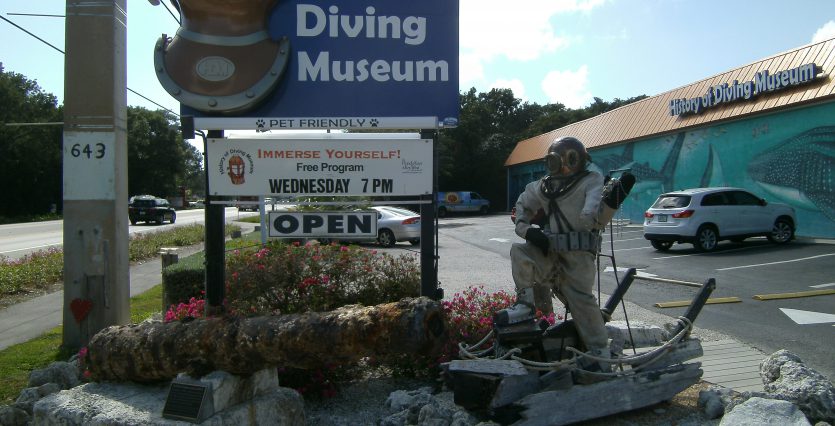 Offshore of the narrow islands of the Florida Keys is one of the world’s important marine ecosystems. Protected by Florida Keys National Marine Sanctuary, the Atlantic Ocean and Gulf of Mexico areas are off-limits to taking wildlife and coral or damaging the natural environment.

As you travel the length of the Florida Keys on the Overseas Highway (US 1), small green “MM” signs are placed all along the route) by the highway department. The first, MM “zero,” is in Key West, and they end at the Florida Turnpike with MM 127.5. Addresses along the route are designated by their Mile Marker (MM) number. The Upper Keys stretch from MM 65 to MM 106.

Captain Slate’s Scuba Adventures is located on the ocean side at Mile Marker 90.7 in Tavernier. Captain Spencer Slate is known as the Pied Piper of the Keys. “Slate,” as everyone calls him, operates three dive boats out of Tavernier Creek. His daughter, Sky Slate, is also a licensed captain and will drive when her father is underwater doing his “Creature Feature.”

Captain Slate has been feeding and interacting with large ocean creatures for 35 years. Yes, he has had some close calls. Once a large barracuda mistook his dive mask for a fish. He still has the broken mask that he shows divers. His specialty is feeding a large moray eel that accepts a dole of baitfish. Divers are instructed to keep their hands to their chests in fists, not wave fingers underwater, and remain on their knees in the sand as the action unfolds.

There is a lot of fun to be had aboard Captain Slate’s dive boats. The sky is easy-going, and there is wonderful interaction between divers and crew. When Sky tied off the Lost Continent at a reef they call “Pleasure,” one of Slate’s instructors, Steve, got buckets of fish ready and sent them below on a line. The divers and underwater photographers jumped in and headed down. The divers gathered in a semi-circle on the sand in front of Pleasure Reef, and it wasn’t long before the Creature Feature began.

A large green moray eel swam out and greeted the divers. The first ballyhoo was handed to the moray and over the next 15 minutes, the moray swam among the divers inspecting camera lenses and sliding between legs then back to the bait bucket to get another handout of ballyhoo. It was a grand performance. Snorkelers on the surface enjoyed the show as much as the divers 9 meters (30 feet) below.

For the second dive, Sky chose David’s Reef, which is in about 8 meters (26 feet) of water. The sun was bright overhead, great light penetration brought out magnificent colors on the reef. A nurse shark greeted divers, as did rays buried in the sand. Along the reef, a memorial consisting of two Buddhas lies just beyond a giant brain coral. Divers rubbed the Buddha for good luck. Memorial tributes are popular on Keys reefs. Schools of fish swam around coral heads with many varieties to be seen under a long ledge that runs along the bottom.

The next dive was to a place called “Pickles.” It got its name from a barge carrying pickle barrels to Key West, and you might find some remnants of the barrels overgrown by coral in the area. This is a shallow dive in about 4.5 to 6 meters (15-20 feet) of water. Coral rises up toward the surface. A large valley between reefs offers a chance encounter with nurse sharks and queen conch.

“Snapper’s Reef is a favorite for underwater photographers. Lots of critters all over this area,” Sky said as she came down off the bridge to help divers gear up and give a site briefing. Snapper’s is a magnificent reef with large coral heads rising up almost to the surface. Colors underwater with good light penetration are magnificent.

If you are interested in art and handmade souvenirs, be sure to stop at Old Conch Harbor at MM 90.3 in Tavernier. There is a marina, coffee shop, and a wonderful ambiance. Sit under palm trees on the veranda overlooking the marina with a cup of coffee. Angel and George Cabrera have preserved Cuban fishing boats that were abandoned on the beach after refugees came ashore nearby. Lobsters are kept in tanks and can be purchased. Various rentals are offered at a creek that leads out into the ocean for water sports.

One of the Keys most interesting attractions, for divers and non-divers alike, is the History of Diving Museum located bayside at Mile Marker 83 in Islamorada. The museum is easy to find with its dive helmet signage, a cannon recovered underwater, a diver’s recompression chamber and an authentic hardhat diver mannequin in full gear on the lawn. The mural on the building was painted by marine artist Guy Harvey. Visitors can enjoy a voyage back in time through the history of diving. Dr. Joe Bauer and his wife Dr. Sally Bauer created the museum, which houses the world’s most extensive collection of hardhats and diving helmets. The History of Diving Museum should be a must-stop on any trip to the Keys. It is fun for adults and young people with educational exhibits, including sunken treasure.

There are many places to enjoy the sunset after a day of diving. If you are tired of fast food and fried food, choose the Oo-Tray Restaurant and Whisky Bar, located at MM 81. The unusual name comes from the pronunciation of the French word meaning beyond the usual. Yoel Sanchez and Chef David Matlock’s restaurant offers inside air-conditioned dining or outside dining. In addition to the excellent cuisine, Oo-Tray prides itself on a large variety of whiskeys and all manner of wines and libations. A variety of small plates is offered that include crab cakes, mussels, wahoo fish dip, and tempura lobster. Do not expect filler laden crab cakes at Oo-Tray. They come to the table on plantains and are all crabmeat. Clams in white wine are also a delicious starter. Oo-Tray will prepare seafood brought in to taste with a variety of sauces. Chef David likes to change the menu with weekly specials that can include everything from steak-frites to pan-seared catch of the day. Desserts are prepared in-house and are great temptations.

Life underwater in the Upper Florida Keys is spectacular. An underwater photographer can spend days patiently exploring one reef. There is everything from marine turtles to sharks, tiny sea caterpillars to massive coral heads. Shipwrecks offer intrigue, and shallow reefs offer the glory of brightly colored tropical fish in a place where regulations protect them from spearfishing. Large groupers pose for pictures. The beauty of early morning sunrise and evening sunsets make any time in the Keys special. The greatest discovery of all is the majesty of life underwater.