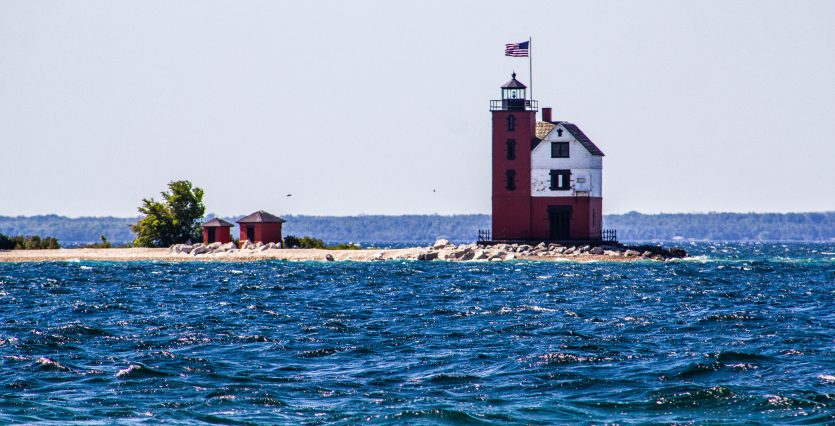 It was 2 a.m. on Nov. 29, 1966, when crewman Dennis Hale awoke to two very loud crashing noises. He thought the noises might be the anchor of their 183-meter (600-foot) freighter, the Daniel J. Morell, slamming against the bow as it battled its way through a terrible storm. He knew something was wrong the moment he tried the light switch by his bunk and the lights didn’t work. Wearing only his shorts, he awoke his cabin mate, donned his life jacket and peacoat and headed to the deck to see what was happening. To his horror, he watched as 52-knot winds and 12-meter (40-foot) waves tore their ship in half. From the time he had awoken until he found himself plunged into the freezing water, only eight minutes had passed. He had been on the bow section, which sank quickly. The stern, on the other hand, was under power when she broke up and continued on with no one in control for another 8 kilometers (5 miles) before it sank. Hale spent nearly a day and a half floating in a life raft in freezing conditions before a helicopter spotted him. He was the only survivor of the crew of 29. While this epic story of disaster and survival seems beyond belief, it’s one of over 6,000 stories of ships that have disappeared beneath the expansive surface of the Great Lakes. And where there are shipwrecks, you’ll find divers.

With over 6,000 wrecks dating from the 1700s to the present, the Great Lakes region is a wreck diving mecca. While some divers shy away at the thought of water temperatures that range between 21 degrees Celsius (70 degrees Fahrenheit) at the surface during the summer months to a pretty constant 5 degrees Celsius (40 degrees Fahrenheit) at technical diving depths, the Great Lakes provide those in search of adventure with a diving season that typically runs from May to early November. That said, the average water temperature at most recreational depths ranges between 10 to 15 degrees Celsius (40 to 50 degrees Fahrenheit), where a 7mm wetsuit can keep you and your students warm. However, if you plan to lead a technical diving group to view some of the more impressive, fully intact schooners or freighters at depths beyond 30 meters (100 feet), you’ll more than likely want to make sure your group is trained and equipped with drysuits. While cold water, deep wreck diving may not appeal to everyone, there’s certainly a large, dedicated audience of divers driven by the excitement of diving some of the world’s best wrecks.

One of those divers happens to be NAUI Course Director and Technical Instructor Rick Sass (NAUI 4782). Rick started diving in 1973 when he received some simple instruction from a friend’s father. He was in high school at the time and he immediately knew he loved the sport. A few years later, while attending Western Michigan University, he took his first formal scuba class and his eyes were opened to how much knowledge he was missing. In 1978, he became a NAUI Instructor, and in 1980 he founded his dive shop, Sub-Aquatic Sports & Service, located in Battle Creek, Michigan. While Battle Creek has its share of local smaller lakes, the big draw for Rick and many of his customers are four of the world’s biggest lakes holding all of those historic wrecks. Michigan is surrounded by Lake Huron, Lake Michigan, Lake Erie and Lake Superior — nearly 225,000 square kilometers (87,000 square miles) of the lake. However, before Rick’s students head to the expanses of the Great Lakes, they usually start a little closer to home in the heart of Michigan. Just a little northwest of Battle Creek is Rick’s favorite local training lake, Gull Lake.

The visibility at Gull Lake ranges from great to terrible, depending on the time of year, but when the visibility is good, there’s a lot of fun to be had there. While students are doing their open water dives and gaining experience, they can see small wrecks like rowboats, speedboats and an old iceboat from the 1800s. There are submerged railroad tracks and a spring. Even with these fun attractions, not all of Rick’s divers get hooked on lake diving. He’s noticed that over the years, his older divers tend to shift their interest toward travel a lot more. It’s his younger divers who tend to dive locally and start exploring all that the Great Lakes have to offer. Usually, they get bitten by the bug when they find old bottles from the 1800s in Gull Lake or when they start taking photos of fish. That’s when their interest starts shifting to the deep, clear water not far from Battle Creek.

The waters of the Great Lakes haven’t always been so clear. Both a curse and a blessing at the same time, zebra mussels, an invasive species from Russia, came to the lakes in the early 1990s and have proliferated there. The damage to boats, water intake pipes, etc. has been great, but a benefit of the proliferation of zebra mussels is that they’ve filtered the water — removing pollutants and microorganisms, thereby increasing visibility. It’s now common to find more than 30 meters (100 feet) of visibility on many of the Lakes’ best shipwrecks. A lot depends on storms, the dive site’s proximity to shore or a well-traveled waterway, or how far north the dive site is, but in general, the visibility in the Great Lakes is very good. With so many wrecks and so much area to cover, where would a diver start?

“We start our divers diving the shallow wrecks in 15 to 20 meters (50 to 70 feet) of water and then work them up to better and better wrecks,” says Sass. Each year Sass runs a series of courses designed to build people up on the wreck diving ladder. They start with Intro to Tech, then progress to Technical Decompression Diver, and finally Trimix Diver. With this many divers at various stages along with the progression, Sass needs locations with a wide range of sites available to satisfy all of his students.

One of his favorite places to take groups of divers is the Straits of Mackinac, pronounced “Mackinaw.” There are at least 12 wrecks in the Straits of Mackinac Shipwreck Preserve, ranging in depth from 12 to 35 meters (40 to 120 feet). Many of these wrecks date back to the 1800s and are protected from pillaging by Michigan’s Underwater Preserve System. There are stiff penalties and fines for anyone caught disturbing the wrecks and their artifacts. While this may be bad news for those rabid collectors out there, it’s good news for all divers. These historic sites will hopefully survive to inspire many generations of divers.

Some of the highlights in the Straits of Mackinac include the Sandusky, a mid-19th-century two-masted brig. Most of her hull is still intact and sitting upright at a depth of 21 to 25 meters (70 to 85 feet). If conditions are right, this can be a good site for less experienced divers too. There are two big highlights in the Straits, but these next two wrecks are for the more experienced wreck divers. First is the Eber Ward. She’s a late-19th-century wooden freighter sitting upright between 33 and 43 meters (110 and 140 feet). At 65 meters (213 feet) long, there’s a lot of her to explore with some decent penetration sites available. And last, but certainly not least, is the Cedarville. She’s the third largest shipwreck in the Great Lakes, behind the Edmund Fitzgerald and her sister ship, the Carl Bradley. She’s a 184-meter- (604-foot-) long steel freighter that lies on her starboard side at a depth of 33 meters (110 feet). This is considered an advanced dive due to the depth, currents, visibility and the disorienting nature of her almost inverted position on the bottom. It’s recommended that only advanced technical wreck divers dive this site.

Another region Sass organizes trips to is Tobermory, Canada. Tobermory offers an even wider range of wrecks to explore, many of which are in shallow water — perfect for those just getting into wreck diving. At a depth of only 6 meters (20 feet), the Sweepstakes is a late-19th-century two-masted wooden schooner that despite its shallow depth is still relatively intact. In fact, the areas where divers could penetrate the wreck have been fenced off so divers’ bubbles don’t deteriorate the wood. The W.L. Wetmore sank at the turn of the 20th century. While she’s broken up considerably, there are still artifacts like the boiler, anchor, anchor chain, rudder and mechanicals that divers can easily explore in just 7.5 meters (25 feet). For those more intermediate divers, there’s the James C. King, a late-19th-century schooner-barge that’s 53 meters (175 feet) in length and is resting on a steep slope in 7.5 to 29 meters (25 to 95 feet) of water. Another good intermediate wreck is the Niagra II, a steel-hulled tanker/dredge that was intentionally sunk in 27 meters (90 feet) of water.

Finally, for the true technical wreck divers, Tobermory boasts a pair of crown jewels. First is the Forest City, a late-19th-century wooden steamer whose stern is still relatively intact in 46 meters (150 feet) of water. The other is the Arabia, a wooden barque sitting upright at 37 meters (120 feet). While many of the wrecks of Tobermory had run aground on the jagged shoreline and then sank into deeper water on the steep underwater slopes, the Arabia sits on a flat plane. The ship’s wheel, the bowsprit, and deadeye are on display, but this wreck is located in an area where there are frequently currents, and it’s always cold.

In addition to those two wreck-rich areas, Sass takes divers all over the Great Lakes in search of the best wrecks to dive. Some of his favorites include the aforementioned Daniel J Morell in the middle of Lake Huron. You can dive both the bow and the stern of this wreck, but with a max depth of a little over 61 meters (200 feet), this is definitely an advanced technical wreck. Another of Sass’ favorites is the Thomas Hume, a late-19th-century three-masted wooden schooner. She sits upright on the bottom at 44 meters (145 feet) about 32 kilometers (20 miles) out into Lake Michigan. And then there’s the Cornelia B. Windiate, a three-masted wooden schooner sitting upright and almost fully intact at a depth of 55 meters (180 feet) in the Thunder Bay National Marine Sanctuary in Lake Huron. Each of these wrecks is like a time capsule to the day they slipped beneath the surface of these mighty lakes.

“This is some of the best wreck diving in the world, no two ways about it,” said Rob Knolle (NAUI 19822), one of Sass’ instructors. “In a drysuit it’s comfortable, and the wrecks are very well preserved. We have a hidden treasure here.” If seeing preserved 1800s vintage wooden schooners and steamships, as well as 183-meter- (600-foot-) long modern freighters sounds like fun for you and your tech divers, then you should start planning your next trip now. Rick Sass and his crew would love to have you dive with them.