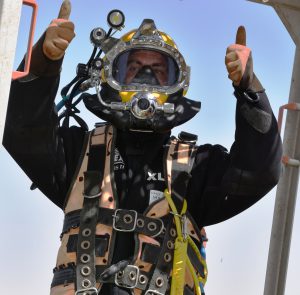 uring 2018, members of the U.S. Army Corps of Engineers Forward Response Technical Dive Team could be found diving in Japan, the Marshall Islands, Puerto Rico, and throughout the United States. Traveling not for pleasure, but working as Army civilians, they brought specialized individual and collective engineering expertise to underwater missions the world over.

“Needless to say, we’ve been a very busy team these past 12 to 24 months,” said co-team leader Steve England, a licensed professional engineer (P.E.) and one of the team’s certified engineer divers. “However, truth be told, this is exactly the way we all like it. We’re are busy, but we are safely and efficiently executing critical underwater inspection missions as well as managing dive operations to evaluate the structural integrity of essential waterfront facilities and coastal infrastructure.” 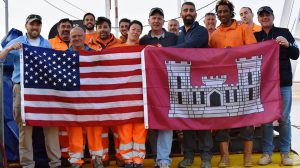 ngland, who works out of Philadelphia District as a hydraulic engineer specializing is scoured analysis, explained missions can last from one day to one month. Additionally, there’s time needed for preparation, which includes pulling together a qualified team, researching and writing a working dive plan, checking equipment, making travel arrangements, and then travel. Once the underwater work is completed, out-briefs have to be produced, and lengthy technical reports must be written.

“Making missions especially challenging is that our diving is only a collateral duty, not a full-time job, second in priority to our primary responsibilities,” said England, who has been a USACE diver and dive supervisor for nearly 20 years. “I’m not complaining; we dive because of its importance to the USACE mission and because we love diving.”

As a barometer to its year ahead, the team, which logged over 100,000 miles in 2018, began with a pair of time-critical post-hurricane inspections; one in January at the Texas City/Galveston Bay Moses Lake levee floodgate and the other in February at Guajataca Dam, Puerto Rico.

At Guajataca, team members from Buffalo District completed underwater inspections of the dam located in western Puerto Rico using both a remotely operated vehicle (ROV) and divers. The mission required the collection of detailed structural conditions and measurements at about 75 feet (23 meters) underwater to support Jacksonville District and FEMA assignments to repair the aged structure damaged by Hurricane Maria.

“An extraordinary amount of planning and coordination was dedicated to this critical dive and ROV operation; there were so many unknowns going into the mission,” said Guajataca Dam dive team leader Shanon Chader who also served as mission safety officer, dive supervisor, and diver. “Our team worked closely with Jacksonville District to ensure we had a good understanding of the job at hand, which allowed us to safely and efficiently complete our task.” 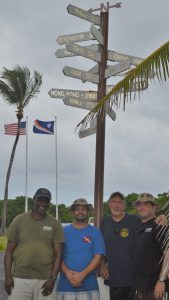 Chief of the Buffalo District’s Coastal/Geotech Team, Chader, also a P.E., explained that divers inspected and measured underwater gates as well as trash rack approaches, channels, and wing walls during the mission, all information vital to effectuate repairs.

“We very much have a can-do attitude when it comes to accepting missions and accomplishing tasks at hand,” said dive supervisor and diver John Bull of Vicksburg, Mississippi. “We have an outstanding group of highly skilled engineers and divers who work very well together. We look out for each other and keep everyone safe. If we can’t do that — be safe and look out for each other — we just won’t accept the job.”

Bull, who also serves as a team mission manager and liaison, illustrated the team’s can-do attitude mobilizing and demobilizing four USACE divers last July, traveling 26,000-mile in 36 hours over six days for a two-week mission to the Marshall Islands, halfway between Hawaii and Australia in the Pacific Ocean. The team’s mission was to perform underwater inspections, bottom surveys, and reconnaissance supporting a $52 million pier rehabilitation project at the U.S. Army Garrison Kwajalein Atoll.

“It’s the diversity of our dive team that creates a synergy that is the hallmark and catalyst of our program,” said team safety officer Darryl Bishop, a dive supervisor during the Kwajalein mission.

Diving to depths of 110 feet (33 meters), sometimes in near-freezing water so turbid divers cannot see the sharks, snakes, and alligators with which they share their work site, the team utilizes a variety of job-specific 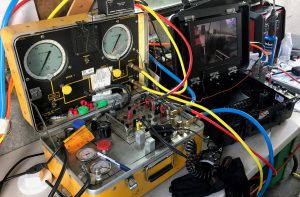 underwater methodologies. One system often used by the team is surface-supplied air (SSA) with a diver-worn helmet attached to a hose delivering unlimited amounts of air to breathe. Using various types of suits providing warmth, divers can talk to teammates on the surface as well as send real-time videos of their work area. Using SSA allows the team flexibility to perform a variety of underwater work including visual and non-destructive testing (NDT), video and still photography, installation, maintenance, and repair work, as well as ships husbandry, salvage, and invasive species surveys as well as shark, snake, and alligator avoidance.

“Our team has an exceptional ability to mobilize with a wide variety of gear that meets our most unique and demanding mission needs anywhere in the world,” explained equipment manager Weston Cross of Buffalo District. “As an example, during one three-week period in 2018, we inspected nearly 15,000 linear feet (4,500 meters) of seawall and piers at three sites in Okinawa (Japan). That work required multiple mobilizations of dive, safety, and inspection equipment, which allowed divers to complete difficult underwater visual, tactile, and NDT surveys providing information leading to critical repairs.”

Initiated in 2012, the Forward Response Technical Dive Team comprises about 20 engineers of various disciplines, biologists, geologists, program and project managers, and technicians from throughout USACE. Members are stationed throughout the United States, including the Buffalo, New England, Philadelphia, Portland, and Saint Paul Districts as well as at the Engineering and Research Center in Vicksburg, Mississippi, and North Atlantic Division in Fort Hamilton, New York. Since inception, the team has safely executed and assisted with more than 100 missions in the U.S. and worldwide, performing certified structural inspections for USACE, its Engineering Research and Development Center (ERDC), and the big U.S. Army Infrastructure Management Command (IMCOM). 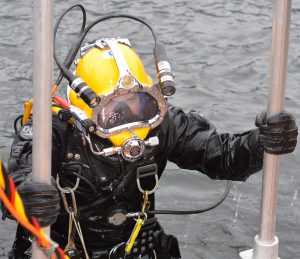 “I believe one of the greatest values of our team is that we bring to missions a highly experienced, well-rounded, multi-faceted team,” said Adam Hamm, a P.E. and Buffalo District’s operations and maintenance chief for New York and Pennsylvania. Hamm, who served as a dive supervisor and diver during a 10-day June mission to Kure, Akizuki and Hiro Ammunition Depots in Japan’s Hiroshima Prefecture. “We not only have the capability to physically perform the underwater inspections but we also have years of engineering experience and technical background to come up with valuable repair alternatives and cost estimates for our clients.”