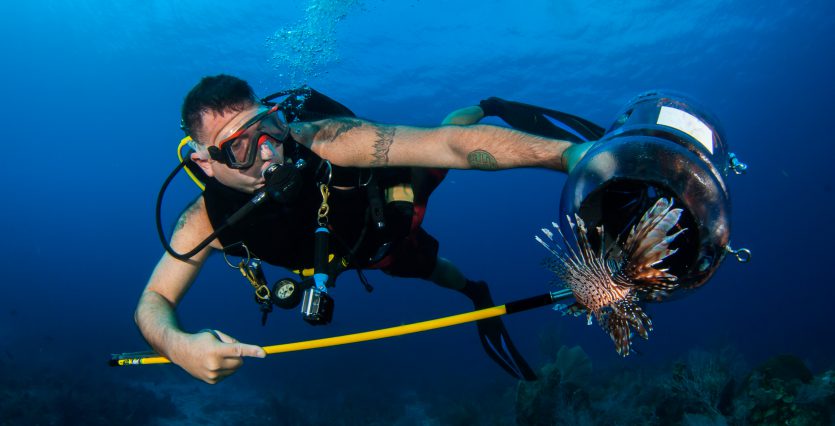 A Study of Lionfish Distribution in the Bahamas

This entry was originally published in the NAUI Sources magazine – First Quarter, 2015 and on the SeaTrek BVI Island Times blog – February 2015.

This past summer, from June to July, I got up close and personal with the Bahamas to gain a better understanding of lionfish and what local dive operators and Bahamians are doing to curb the population growth. This unique voyage was made possible when SeaTrekBVI, a youth sailing, scuba, and marine biology program based in the British Virgin Islands, partnered with Lost Island Voyages, a dive charter boat based in the Bahamas.

The result was a three-week youth sailing and scuba diving program that wandered the Barry Islands, Bimini, Andros, New Providence, and even the Exumas. The whole trip was amazing, from halyard swinging and shark diving to island trekking excursions, but the real purpose of my trip was not simply to have fun but also to conduct research on lionfish.

Growing up in South Florida, I already knew a great deal about the ‘Lionfish Invasion’ and the destruction they cause in the ecosystem. Lionfish were first seen in the Atlantic Ocean around 1980 and since then, their population has grown exponentially due to lack of predators and an abundance of food. Lionfish are able to breed rapidly as well. A single mature female lionfish can release up to 15,000 eggs, which can hatch in two days.

These factors have allowed lionfish to prosper in the Atlantic, creating a major problem for the native species. These Atlantic lionfish have been labeled as an invasive species, and now studies like mine are being conducted to learn more about them and help highlight ways locals are working to solve the problem.

My experiment tested the distribution of lionfish around the Bahamas, and questioned which environmental conditions were most likely to facilitate lionfish growth and impact. I hypothesized that if lionfish are truly a problem that local dive operators are trying to control, then they would be in greater abundance on sites with low tourist traffic.

The first step in testing my hypothesis was to get everyone onboard our boat, the S/Y Avalon, involved in the experiment. I asked the students and crew aboard Avalon to report every lionfish sighting to me. I kept a record of the reports from both divers and snorkelers, along with the location, the habitat where they were found, and whether or not we were able to capture the fish. We did this for most of our thirty-nine dives and numerous snorkels. Through our observations my hypothesis was supported.

Our data showed that the more accessible a dive/snorkel site is to the mainstream tourist, the fewer lionfish we found. Popular sites near New Providence averaged as few as two to three lionfish. All of the local divers/snorkel operators know to kill or report lionfish, so at these sites they are less likely to survive. On the other hand, lesser known or lesser visited sites were teeming with lionfish, especially those sites in deeper.

Our data showed larger populations of lionfish on the east coast of Andros, a large island with little dive tourism compared to the Exumas and New Providence. One site in particular, a wreck named ‘The Lady Moore’ lay on the bottom of the ocean with a maximum depth of seventy feet. During our dive we found twenty-nine lionfish, only counting those visible through openings on the wreck. Not only were there more lionfish than we had seen on other wrecks, but the fish were much larger and more mature. Captain Ray and our dive instructor Chris confirmed that fewer dive operators visit ‘The Lady Moore’ or any other sites in the general area.

Along with recording lionfish sightings, we also worked to help lower their population. As often as possible, many of us SeaTrek students would go spearfishing, specifically looking for lionfish. Within the first four days at sea, anyone interested was taught how to spearfish, and at least one lionfish during each snorkel session was taken out of the population.

This was not just purposeless killing of the fish! After bringing them back to the boat, I was taught how to fillet them while avoiding their venomous spines. After filleting them, we learned how to cook them, and we ate delicious lionfish dinners that we all agreed were better than any other fish in the sea!

If the lionfish was not used for dinner, I was encouraged to save it for dissection to learn more about the organism’s inner workings. One of my dissections was performed before the rest of the boat, where I was able to teach my peers about the eating habits and reproduction capabilities of these invasive little creatures.

Lionfish continue to be a problem in the Bahamas, as my dives showed me, but on this trip I also learned about some of the people and their efforts to curb the population growth. I was given hope when talking to a dive instructor who has been diving for years in the area we traveled. He explained that on many sites they are seeing a decrease in the numbers of lionfish, especially as their threat becomes better known.

In the end, I feel that lionfish are still a serious threat to the reef health for the entire Caribbean. As more people learn about what they can do to help, we will be able to move toward a solution. Let’s keep the conversation alive.

Have you encountered lionfish during your dives? Submit a NAUI Green Diver Initiative article about your experience with this and other invasive species. Contact Sam Richardson at srichardson@naui.org.

To learn more about this youth sailing, scuba and marine biology program, visit SeaTrek BVI and the Island Times Blog.